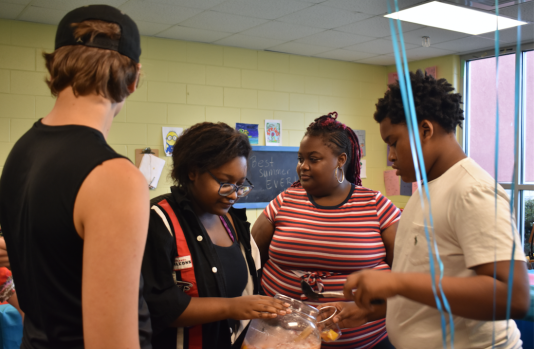 Pictured with punch made with fresh fruit are, from left, Benjamin Rogerson, Julie Westbrook, Veronica Perkins and Jaheim Maye. 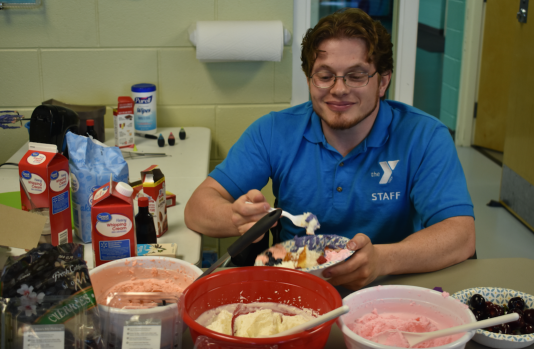 Zachariah Kowalski with the Southside Family YMCA enjoys homemade whipped cream and fruit that he and participants of the Living Healthy in the Heart of Virginia program made. 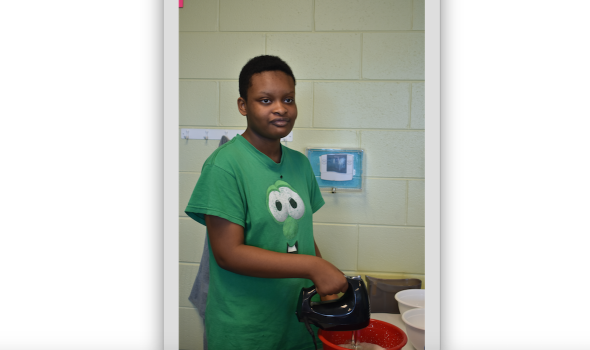 Gathered in a meeting room at the Southside Virginia Family YMCA, approximately 12 people attended graduation from a 35-week program focused on healthy living.

Six families were selected to participate in the program through a drawing held by STEPS Inc. Over the course of the eight-month program, the individuals who attended became a family.

Veronica Perkins and Julie Westbrook, who are in their late teens, have become fast friends. The meetings have brought the participants, and the families, closer to one another.

The Living Healthy in the Heart of Virginia program was established by STEPS Inc., the Southside Virginia Family YMCA, FeedMore and Longwood University.

The weekly meetings focused on various areas of health. During one week, participants learned how to use air fryers to cook meals. Air fryers are considered healthier options than frying items in vegetable oil. At the end of the meeting, participants received air fryers of their own to use for family meals. Other weeks included learning about safe food preparation, how to safely use exercise equipment, first aid, and keeping one’s home safe from intruders or fires.

Each week, families went home with fresh fruits, vegetables and grains to eat, Amanda Blaisdell, professor of Health Science at Longwood, said. When participants didn’t have transportation on a certain week, organizers transported them using a company van or their own vehicles.

Amy Beatson, vice president of program services with STEPS Inc. said there’s the possibility that a second version of the program could occur in the future.

Willie Foster, one of the graduates, most appreciated learning about nutrition, and the function that certain foods had in preventing or lessening the effects of certain chronic conditions. Foster, who has had chronic conditions involving his heart and liver, said he would take what he learned home with him.

“I loved it all,” Foster said about the program.

Participants also played games and enjoyed activities at the Y. This included everything from swimming in the pool, which Perkins enjoyed, to playing sit-down volleyball, which Westbrook enjoyed. One favorite game by participant Jaheim Maye was called mushrooms, in which players guarded sponges atop of cones while trying simultaneously to knock the other players’ sponges off other cones.

Benjamin Rogerson enjoyed learning how to cook some of the recipes they explored, which included pizza with pita bread and fish tacos.

Participants found out at the end of the night they received 12-month memberships to the Y free of charge. Those who requested bikes received their own bikes, with helmets, STEPS representative Megan Gary said. Two participants who didn’t request bikes received Fitbits.

YMCA representative Zachariah Kowalski noted the community that was made through the meetings.

YMCA manager Josh Gravette said he wasn’t employed with the Y in Farmville when the program first began, but also came to see how the meetings created a community committed to health.