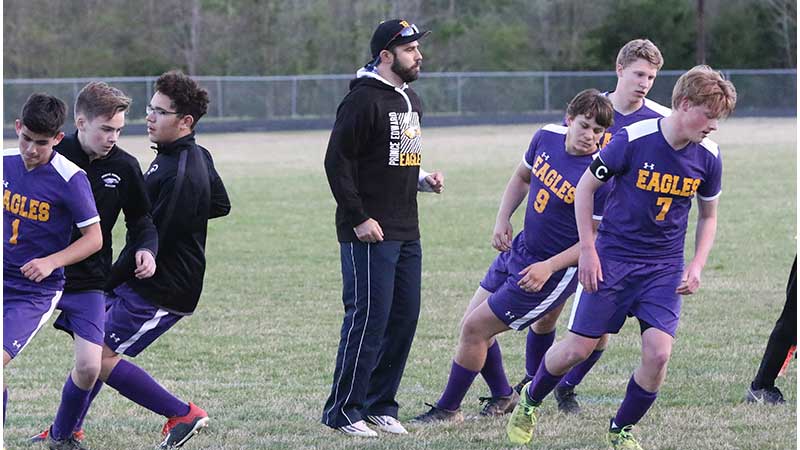 Buckingham County High School, which finished third in the district with a 10-4-2 record, was represented by four all-district selections.

The Eagles finished the season with an 11-6 overall record, going 11-5 in the district.

Sharing his thoughts on his team’s all-district representation as voted on by the district’s coaches, Chirila said, “We were second place at the end in our district, so I think it was correctly represented. They recognized the players that stood out throughout the season.”

Beginning another stint this year as Eagles head coach, Chirila also received the Coach of the Year honor in 2013 when Prince Edward was part of the Southside District.

“It’s a great pleasure for me for the second time to be Coach of the Year, but I think it’s all due to the team,” Chirila said. “We work together. My assistant coach, as well, helped me get this award, and overall as a team, I thought that we were competitive but very respectful, so I think that the other coaches recognized that we played fair and we tried to play not just fair but also to be respectful of the other competition, of the referees, and I think those things count overall.”

Rust recorded 11 goals, five assists and 30 shots on goal during the regular season.

“We awarded him our MVP for the year,” Chirila said. “… We played him most of the time as an attacking midfielder. He was linking the defense and the strikers. He was the one creating opportunities, and overall, I think he stood out as being the brains of the operation.”

For the Eagles this year, “he had the most amount of assists and tied for first place on number of goals and highest number of shots, so he was definitely the threat up top,” Chirila said. “He was also working to put pressure on defense as well, so he wasn’t just the firepower.”

Sutton scored two goals and had three shots on goal.

“As a center defender, he was coordinating the defense …,” Chirila said. “He was definitely a vocal leader, but also on the field, he was hustling, and the other coaches recognized the amount of effort and his determination to block shots, to clear the ball from the defense.”

“He’s just a hard-nosed kid when he plays,” the coach said, adding that Lee, who had three assists, was a leader who helped shut down the right side of the field.