The impact of Kathy Riley 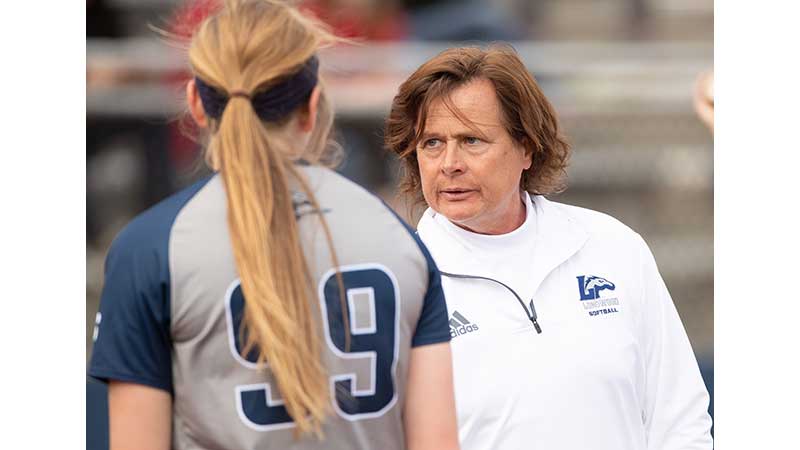 Longwood University Softball Head Coach Kathy Riley, right, gives some instructions to sophomore pitcher Sydney Backstrom. Riley has set a high standard for her team during her 22 years as its leader, and her hard work has yielded a dynasty that has been dominant in the Big South Conference across the last seven years. (Photo by Mike Kropf / Longwood University)

Longwood University’s softball team has been successful throughout the 22 years Kathy Riley has served as its head coach, but within the last seven years, her influence can now be said to have fostered a dynasty in the Big South Conference, and the impact of this success reaches beyond the softball field.

During the 2019 season, the Lancers went 37-22 overall, winning their fifth Big South Tournament championship in the last seven years and their third Big South regular season title in the last five.

Riley acknowledged that the word “dynasty” will come up after success manifests this consistently. She shared what comes to her mind when the dynasty conversation ensues.

“I think about the (New England) Patriots a lot,” she said, “and I’m like, things are so fickle because if you look at a couple of the Super Bowls they were in, they easily could have lost two or three of those. And sometimes good luck shines on you, and I felt like even that’s what happened this time. There was a couple years we won, and we just played outstanding all the way through the tournament. This is one of those times where the ball could have bounced this way or that way, and it would have gone against you. So at some point you have to have good luck in there, and I think we were fortunate.”

She then noted that she doesn’t think of the concept of the Lancers being a dynasty too much.

“I do know that it does feel good to be on top, and I know it’s harder to be the one with the target on your back, but I’ll take that any day over the one that has to chase all the time,” she said. “I’ll take five out of seven and have to worry about how we can get there the next time.”

Aside from luck, she said a common denominator that has made Longwood’s successful run possible is the culture that her players have bought into.

“We base our program on working really hard and then respecting each other,” she said.

She pointed to sacrifices that must be made for others, and this can include biting one’s tongue at times.

“Everybody has a different personality, and along the way, you have to be able to say, ‘I’m willing to not say what I think today for the good of what we need to do,’” she said. “Sometimes when you’re in the midst of the season, you’re just trying to win games and trying to play your best softball, you don’t think about it, but this team right here has treated each other as good as any team that we’ve had — just not much confrontation, not much conflict …”

She said the selfishness that sometimes comes along with the ego of any good athlete was not a big part of what the Lancers did this year.

“And we’ll be able to look back and say that was the personality of this team,” she said.

This discipline of selflessness helps develop important character in the lives of her young players that will serve them well the rest of their lives off of the diamond.

Longwood’s consistent success has likely been a key reason why the Big South’s one allotted regular season game on ESPNU has featured the Lancers each of the past three years. This season and last season, this meant ESPN’s cameras came to Farmville, giving the town national exposure.

Riley has made clear how much the Farmville community means to her team, helping form the heart of its fan base, and community leaders have made clear their appreciation for her and what she does for the area.

“Longwood is clearly the major economic engine that drives our area,” Farmville Mayor David Whitus said. “When athletic teams win championships, such as Kathy Riley’s softball team, it not only shines the spotlight on Longwood but also Farmville — it’s that hand-and-glove relationship. When championship games are hosted locally, it brings crowds, which is an immediate boost to the local economy.”

Farmville Town Manager Gerald Spates said, “Longwood University softball, under the direction of Coach Riley, has had a remarkable run … It speaks well of Coach Riley’s character in the fact that she involves the community and the players in sharing her success.”

See Friday’s edition of The Herald for a feature on Longwood redshirt senior Karleigh Donovan, who finished at her best this season, earning the title of 2019 Big South Tournament MVP.