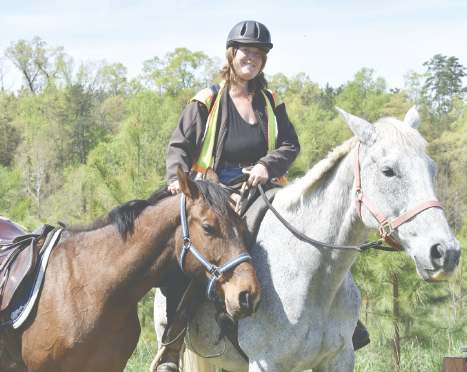 EMILY HOLLINGSWORTH | HERALD Sarah Murphy and her two horses, Unbridled Flourish (UFO) and Rob Roy are riding the 600-mile Atlantic Coast Pipeline. Starting in September 2018, they have already covered more than half the distance.

Sarah Murphy said she grew up with horses, having first started riding at 3 and having a family that camped overnight with horses.

Her knack for caring for horses, as well as hearing about the news related to the Atlantic Coast Pipeline (ACP), led her to use her unique skills to take a different approach to spreading awareness about the pipeline.

compressor station was approved off Route 56 in Buckingham County. The project has been commended for its economic and community development potential, but there is also concern due to potential environmental impacts and the pipeline’s path through largely rural, and in the case of the Union Hill community in Buckingham, largely African-American communities.

“I feel responsible to share (peoples’) stories,” Murphy, a graduate of James Madison University, said. “There are three states wrapped up in this.”

It was mild and brilliantly sunny as Murphy, while visiting a farm in Buckingham County, brushed Roy Rob and UFO’s manes, fitted braces and boots on their hooves, and placed saddles and packs over them.

“It’s been an adventure, a trial by fire,” Murphy said about the endeavor.

These different parts include the needs of the horses, finding places to camp or stay, and taking shelter when weather strikes.

She said they took cover during the recent tornado warnings and storms.

Murphy took the unexpected weather in stride, joking that her last name made her accustomed to expecting Murphy’s law: whatever can go wrong, does.

Murphy and Rob Roy have already traversed a good half of the pipeline path, taking on the mountainous environment of West Virginia. As they were coming home to take a break for the winter, the Fourth Circuit Court of Appeals issued stop work orders on the ACP.

Murphy said she keeps a neutral outlook on the project, having interacted with residents coming to terms with the pipeline near or crossing their properties, employees of Dominion Energy and ACP, those with concerns about environmental impacts and officials in different localities.

“We have been blessed in a lot of ways,” Murphy said. “People have been really good to us.”

She, Rob Roy and UFO have spoken with residents of Union Hill and residents near the compressor station site.

After the interview with The Herald, Murphy said she was meeting with a film crew from Liberty University to discuss the project.

Murphy said she’s ridden on terrain and used a machete to bushwhack paths. She said because the pipeline construction has halted in Virginia, they travel parallel to the path.

The project in and of itself was a risk. She hadn’t anticipated the level of recognition the journey has brought, with some recognizing her, Rob Roy and UFO while on the road.

She encouraged people to examine renewable energy resources, such as wind and solar, resources that Murphy said Dominion Energy is also exploring.

Murphy said the next leg of their journey before reaching North Carolina and the end of the pipeline path in Robeson County will be to go to the Chesapeake Bay area.

When near the water, Murphy said she’s excited about the prospect of guiding Rob Roy and UFO on the sand and having them see the ocean.

“It’s something to look forward to,” Murphy said.