Falcons prepare for another state run 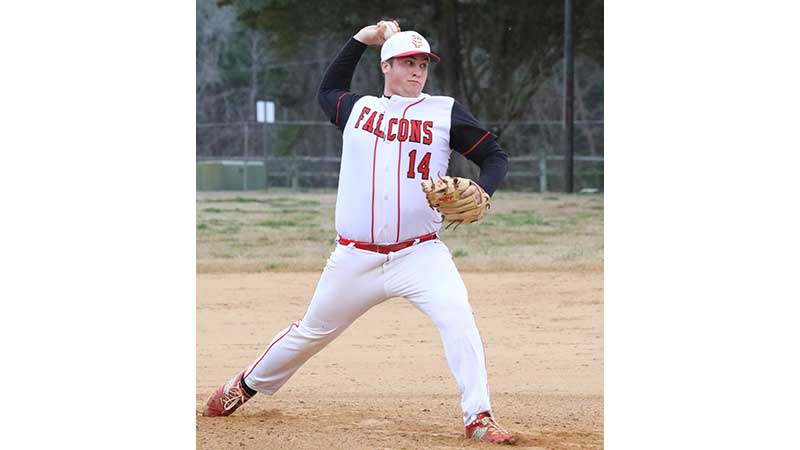 Fuqua School senior D.J. Williams has been the Falcons’ No. 1 pitcher this year, and he also leads the team with a .565 batting average. He will aim to help Fuqua make its third straight state title game appearance. (Photo by Titus Mohler)

Fuqua School’s varsity baseball team capped off a successful regular season with a 10-4 home win over Isle of Wight Academy on May 6, sending the Falcons into state tournament play Tuesday with a 12-5 overall record this year. The Falcons, who drew the No. 4 state seed, improved that win total to 13 Tuesday after defeating visiting No. 5 Portsmouth Christian School 11-0 in the first round of the Virginia Independent Schools Athletic Association Division III state tourney.

Taylor Myers, Fuqua’s new head coach, was pleased with the record but blamed himself for why it was not even better.

“To be completely honest, we had a very good chance of going undefeated, and a couple games were my calls that cost us the game,” he said. “The first North Cross game was my decision that kind of lost us the game, but also we hung in there with some tough opponents like Benedictine, Collegiate and Highland. We lost walk-offs to Highland and Collegiate, and then Benedictine, if we had pitched our aces — but I was holding them for Collegiate — if we had pitched our two or three aces that we had in that game, we would have given them a run for their money and possibly could have even won that game.”

Myers noted that four pitchers have given the Falcons great innings this year: senior D.J. Williams, who is the team’s No. 1, junior Matt Osborn, senior Christian Adams and freshman Braxton McClure.

“The four of them have really stepped up,” the coach said.

They bring a variety of looks with which batters must contend.

“D.J. and Christian, they just bring seniority, and they bring a maturity on the mound where they’re going to get it done no matter what,” Myers said. “And then Matt can come in there, and he’s a shutdown pitcher as well, so the three of them are shutdown pitchers bringing a little bit different pitch selection. D.J. will overpower you, Matt will finesse you, and Christian has four different pitches that he can throw for strikes, which is hard to find in this age. And then Braxton, his youth, he’s an uncut diamond, so to speak. … Next year, he will be one of the ones we look towards with giving us some more innings.”

Williams is also a leader on offense.

The coach estimated that Osborn batted .380 and said sophomore Cody Fulford batted around .360.

“They’re all in different parts of the lineup,” Myers said. “We’ve got Tanner Thomas and Matt Osborn at the top two spots, and then we have D.J. hitting cleanup and Elijah hitting sixth and Cody Fulford hitting eighth.”

“So the six of them really paced our lineup for us,” the coach said.

Warner, a junior outfielder, led the team in stolen bases during the regular season with 12.

After Tuesday’s victory, Fuqua is now set to play 7 p.m. Thursday against either No. 1 Walsingham Academy or No. 8 Broadwater Academy at Shepherd Stadium in Colonial Heights. The Falcons have reached the state title game the past two years.