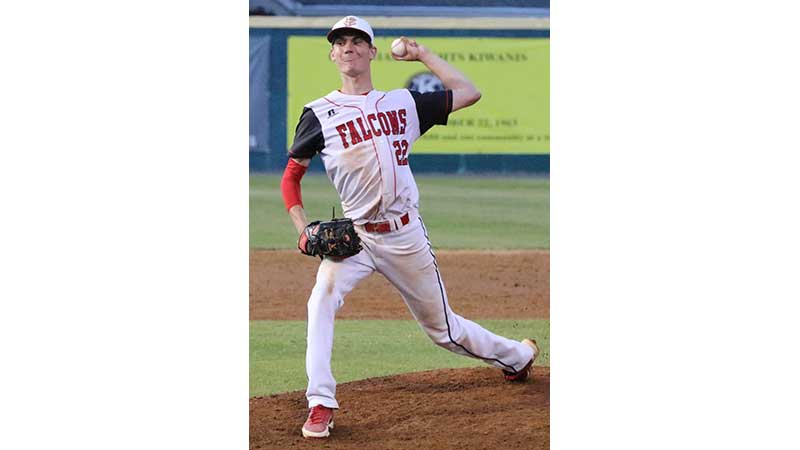 Fuqua School junior Matt Osborn pitches during the No. 4 Falcons’ game against No. 1 Walsingham Academy in the VISAA Division III state semifinals May 16 at Shepherd Stadium in Colonial Heights. In addition to his mound contributions, Osborn went 2-for-2 at the plate with an RBI, and he drew two walks. (Photo by Titus Mohler)

The No. 4 Falcons were taking on No. 1 Walsingham Academy on May 16 in Colonial Heights and fell behind 5-2 and 7-4 early before surging ahead 8-7 in the top of the fifth inning. But too many Fuqua errors and strikeouts allowed the Trojans to come back for a 10-8 win in the Virginia Independent Schools Athletic Association (VISAA) Division III state semifinals.

The Trojans, who edged the Falcons 6-5 in 10 innings to win last year’s state title, went on to repeat as state champions Saturday morning with a 12-2 victory over Southampton Academy.

It was Southampton that dealt Fuqua a 6-5 loss in the 2017 state final after the Falcons had dispatched the top-seeded Trojans 4-2 in the semifinals.

Shortly after his team’s May 16 semifinals loss to Walsingham, Fuqua Head Coach Taylor Myers said his team left everything out on the field but also hurt itself with mistakes.

“It’s very hard to win when you have five errors,” he said. “We hit the ball. We had 10 hits, but we had about (14) strikeouts, and you can’t win with the strikeouts and the five errors. They put everything they had in it. We were getting pinched behind the dish a little bit, and I’m not making excuses, but we fought our hardest, and it’s just tough because you hate to see the seniors go out like that, especially D.J. (Williams) and Christian (Adams), who’ve put so much into the program.”

Williams finished with a hit and an RBI in the game.

Leading the Falcons on offense was junior Colton Copley, who went 3-for-4 with an RBI and two runs scored.

“We saw some bright spots tonight,” Myers said. “You had Elijah Warner stick up and clutch up, and he’s been doing that all year for us.”

“You had Drew Osborn, Matt Osborn clutch up,” the coach said, adding that Matt Osborn also pitched during the game.

At the plate, junior Matt Osborn went 2-for-2 with an RBI and drew two walks. Junior Drew Osborn recorded a hit and an RBI.

Freshman Braxton McClure finished 2-for-4 with an RBI and a run scored, and he also had one stolen base. Freshman Tanner Thomas went 1-for-3 with an RBI and two runs scored.

“All the younger kids stepped up, and on any given day, we would win nine out of 10 against (the Trojans),” Myers said. “But it was just one of those things where the five errors, it hurt us, and the (14) strikeouts really hurt us.”

But a less-than-perfect performance from the Falcons did not diminish the coach’s deep appreciation for his players.

“I’m very proud of the kids,” he said. “I told them I would go to bat for all of them. I love them like brothers, and we’re all a family, and we win and lose as a family. And we figured out if you lose, you figure out some good life lessons, and then we learned some tonight.”

Fuqua finished the season with an overall record of 14-5.

“Overall it was a great year,” Myers said. “This team had it in (itself) to win the whole thing, and a couple blunders by myself as a coach but also errors killed us and not having everybody at full strength this year due to injuries and stuff really hurt as well. But all in all, this team will always be remembered, the seniors will always be remembered as the foundation for Fuqua baseball, and we’re going to miss them for next year.”