‘Be a lifelong learner’ 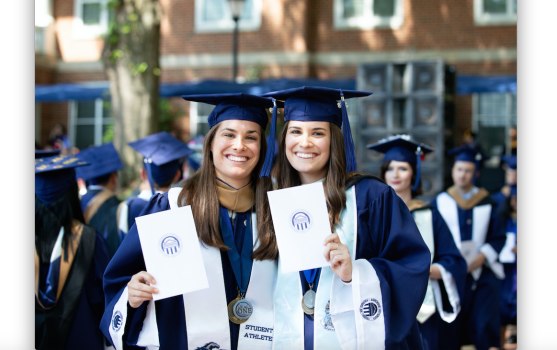 LONGWOOD UNIVERSITY Longwood University had three valedictorians this year, all of whom had a perfect 4.0 GPA. Two of the valedictorians, pictured, were a set of twins — Kate Spradlin, left, and Kellen Spradlin, of Blue Ridge. 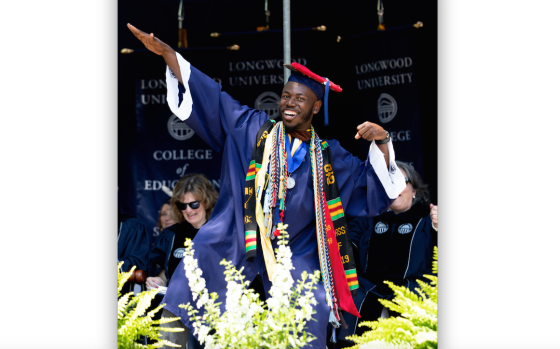 Standing in the spot that had once been his childhood backyard, Griffin issued a challenge to the Longwood graduates sitting before him on Wheeler Mall, officials cited in the release.

On the day after the 65th anniversary of the landmark Brown v. Board of Education case that struck down segregated public schools — in which Prince Edward County provided the majority of plaintiffs — Longwood President W. Taylor Reveley IV noted the remarkable journey that led Griffin to the stage, the release stated.

“Skip spent his youth in the fulcrum of history, and he is central to a story that it is good for the soul to know,” Reveley said.

Griffin said his experiences give him a heightened understanding of the value of education, the release cited.

“Education is not just about securing a means or a way to earn a living,” Griffin said. “It is also about learning to be a citizen and developing yourself more fully as a person. I’ve been impressed with your efforts and the requirement that you spend some time learning and understanding what it means to become a citizen participant in this great democracy of ours.”

Griffin’s charge to focus on building community by lifting others up was echoed by Brian Ball, the featured speaker at May 17’s graduate ceremony, officials stated in the release. Ball is the Virginia secretary of commerce and trade and recently helped lead Virginia’s successful bid to land a major Amazon.com headquarters.

The release noted that Longwood Board of Visitors Rector Marianne Radcliff urged graduates to take up the mantle of service that previous generations have carried.

“For people to understand Longwood, they need only to know her graduates,” she said. “Show the world what Longwood is about. Illustrate what we’ve built here together. A place where the importance of citizen leadership is understood. A place where we come to see that it has no curricular boundaries. A place where our eyes are opened to the great good it can do.”

Griffin and his family are luminous figures in Farmville, officials highlighted in the release. Griffin and his sisters were plaintiffs in the landmark 1964 desegregation case that forced Prince Edward County to reopen public schools that had been shuttered rather than integrate. Their father, the Rev. L. Francis Griffin, known as “The Fighting Preacher,” was a prominent voice in the civil rights movement and a staunch advocate for education rights.

The release cited that Griffin dedicated the May 18 commencement address to the memory of his parents, the Rev. Griffin and Adelaide Payne Griffin, whom he said “dedicated all of their adult lives in your tradition of citizen leadership to trying to make this community a better place.”

The poignancy of the moment was not lost on Griffin, himself a Harvard University graduate who worked for The Boston Globe newspaper before joining Dialogos, a management consulting and leadership development firm, officials said in the release. When he walked down Wheeler Mall on May 17 to scope out the stage, he realized he was standing in the backyard of what was once his childhood home.

“In 1958, when we had to move from this home, the thought of me being here as speaker and the thought of students of color being in the graduating class was not a possibility,” he said. “That is not lost on me, and it is not lost on the members of this community. Sixty years ago, we in this community struggled against each other. For the last 10 years or so, we have struggled together to find a way forward, to reconcile with one another and to move this community, this commonwealth and this nation toward a more perfect union. I challenge you to continue what your university has done here.”

The release stated that at the May 18 ceremony, three seniors shared the Sally Barksdale Hargrett (1921) Prize for Academic Excellence, given each year to the graduating senior or seniors with the highest GPA. Zachary Crawford Morgan, a chemistry major who plans to pursue a career in medicine, and twins Kate McKinzie Spradlin and Kellen Elizabeth Spradlin, both business administration majors who will attend St. Joseph’s University to pursue master’s degrees, all achieved the highest possible GPA — a perfect 4.0.

A student committed to community service in myriad ways, Megan N. Garrett, who earned degrees in political science and economics, was awarded the prestigious Dan Daniel Senior Award for Scholarship and Citizenship, the release cited. Garrett, who is going into the Peace Corps, has taken on numerous leadership roles on campus, including chair of the Student Government Association student services committee, vice president of service for Mortar Board and she helped to found Elwood’s Cabinet, a campus food pantry. She has also taught general education courses to local General Educational Development students and is currently collaborating with Farmville leadership to establish a permanent economic development position.

Retiring political science professor Dr. Bill Harbour was awarded the Student-Faculty Recognition Award, annually given to one faculty member for professional excellence and service to students, officials stated in the release.

Officials noted in the release that at the May 17 graduate ceremony, Ball recounted the story of Col. Rogers, a teacher and guidance counselor at his high school who had a profound impact on his life and worked behind the scenes to help him get into college and then law school.

“I wouldn’t be here talking to you if it weren’t for Col. Rogers,” Ball said. “He saw a young man who was acting out, and he took the time and made the effort to help me. He didn’t have to do that, but he did, and he made a huge difference in my life. Each and every one of you can do that. I know it sounds trite, but that is so very true. And that’s true whether you’re in education or in business or in some other pursuit.”

Speaking to the 149 graduates at the graduate ceremony, Ball urged them to lift up those around them so they can reflect on a life well-lived, the release cited.

“Everything we do touches someone else because we don’t live as hermits,” Ball said. “We’re social creatures, and we can affect each other’s lives in wonderfully positive ways. Longwood works intentionally to build community — community means helping one another, and it means the actions that we take as individuals affect the whole. You may not get an angry kid like me into college, but you can make a difference, and you never know when you’re going to be someone else’s Col. Rogers.”

Officials concluded the release by noting that at the ceremony, several faculty members and students were recognized with awards: