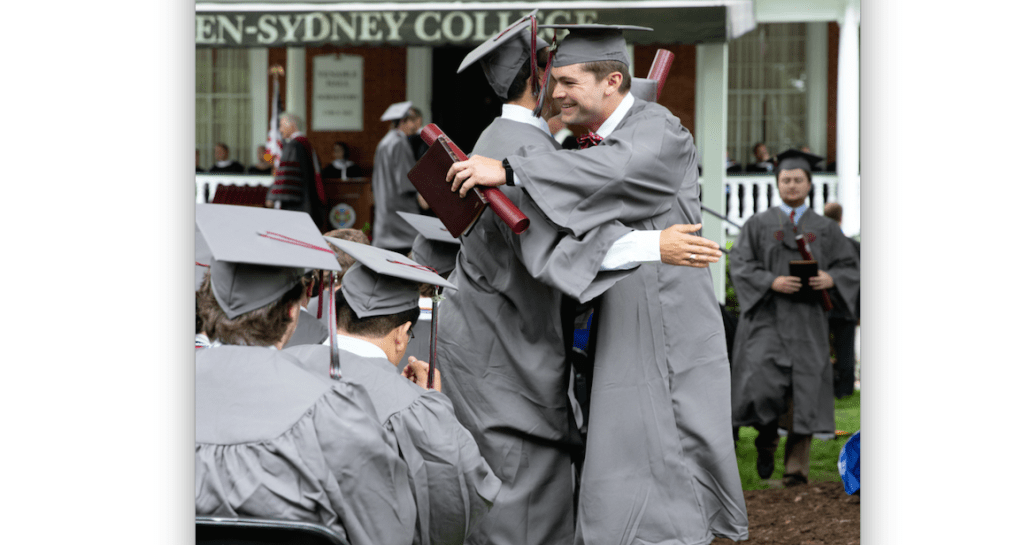 Saturday featured the commencement exercises of the 244th year of Hampden-Sydney College (H-SC), a college press release noted, adding that the rain held off as family and friends gathered on the lawn of Venable Hall to watch 188 men join the ranks of the nation’s fourth-best alumni network.

Officials cited in the release that In addition to remarks from college President Dr. Larry Stimpert, the assembled faculty, staff, graduates, family and friends were addressed by philanthropist and co-founder of The Carlyle Group David Rubenstein and the senior class valedictorian, Blake A. Martin, a biochemistry and molecular biology major.

Martin reflected on the lessons he and his Hampden-Sydney brothers had learned from their alma mater, in particular the importance of self-giving, the release highlighted.

“This college and the people that make her up, like a good mother, have given us so much over the past four years, and we ought to go out and share that lesson with those we meet,” he said. “Never forget your alma mater, and ‘reject not her teachings, for they are a fair garland for your head and pendants for your neck.’”

Rubenstein began by noting Hampden-Sydney’s unique position as a pre-revolutionary college whose alumni bear the names of two distinguished individuals who made the American Revolution possible, officials stated in the release. He assured the assembled graduates that for the rest of their lives, people will ask them where they went to school.

“And when you say, ‘Hampden-Sydney,’” Rubenstein advised them, “you should say it with great pride, because those individuals after whom the school is named sacrificed their lives for the very principles this country was founded on.”

A leader in the area of patriotic philanthropy known for his transformative gifts to the National Archives, the Library of Congress, the African-American History and Culture Museum and the restoration and repair of the Washington Monument, Rubenstein also urged the members of the Class of 2019 to embrace the spirit of giving back, the release noted.

“Philanthropy is an ancient Greek word that means ‘loving humanity’; it doesn’t mean ‘rich people writing checks,’” he said. “You can love humanity by giving your time, your energy, your ideas, whatever you can give. And so all of you graduating today and all of you listening today, think about what you can do to give back to our country. Don’t wait until you’re my age; do it when you’re younger. Make it part of your DNA.”

Officials cited that President Stimpert told the graduates, “Today, as you walk across this stage, you will receive a diploma that entitles you to claim the distinction of being a Hampden-Sydney graduate. This diploma is a tangible symbol of the preparation you have received here to pursue your dreams and purpose and to lead and serve — with competence and honor — your families, organizations, communities and our nation and society.”

The college presented diplomas to 188 graduates at commencement, the release stated. Honorary degrees were also given to Rubenstein; the previous night’s baccalaureate speaker, Dr. John Hillen, CEO of Everwatch and former assistant secretary of state; and Mr. Alexander M. Byrne, a member of the senior class who died in a tragic car accident in February.

Officials noted in the release that in addition, several students, faculty, staff and friends of the college received awards during the ceremony.

Alec M. Cobb was this year’s recipient of the Gammon Cup, awarded to the student-athlete in the graduating class who has best served the college, the release stated. Cobb, a Patrick Henry Scholar and Dean’s List student, was twice named Old Dominion Athletic Conference (ODAC) Offensive Player of the Week in football. For the 2017-18 year he was second in the ODAC in passing touchdowns and had the highest completion rate in school history.

The Anna Carrington Harrison Award, given to the student who shows the most constructive leadership in a school year, was awarded to Michael D. Good, officials said. A President’s Scholar and member of the Society of 1791, Good served as Student Body President and a representative on the College Activities Council.

Officials in the release highlighted how the Algernon Sydney Sullivan Medallion, which honors students and friends of the college for character and service to Hampden-Sydney, was awarded to three individuals:

The Cabell Award, given annually to a faculty member in recognition of outstanding classroom contribution to the education of Christian young men, was awarded to Assistant Professor of Classics Robert P. Irons, the release cited.

Officials in the release said that the Thomas Edward Crawley Award, which is awarded to a professor “most distinguished for devoted service to the ideals of Hampden-Sydney and the education of her sons,” was given to Elliott Professor of History Caroline Emmons.

Good presented the Senior Class Award to Elliott Associate Professor of Biology Michael Wolyniak, the release stated. The award is given to a member of the college’s faculty, administration or staff who in the eyes of the class members has contributed during their four years most significantly to the college, its students and the community.