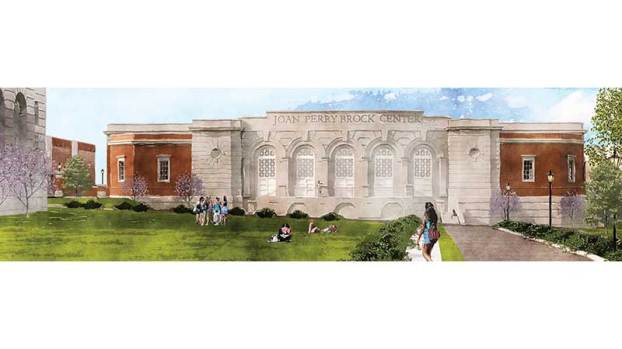 Pictured is a preliminary design of the Joan Perry Brock Center estimated to open in spring 2022. (Graphic courtesy of Longwood University) 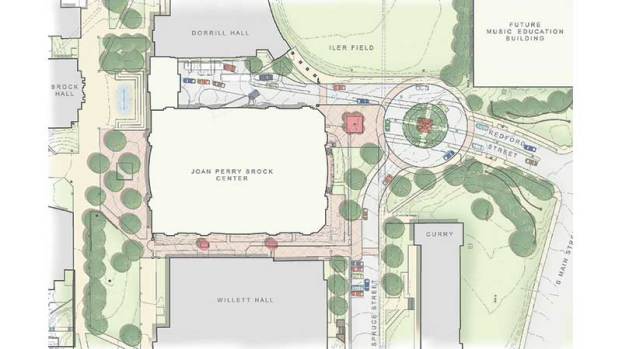 Longwood University announced Wednesday that its largest financial donation to date of $15 million is set to be used to construct a new convocation and events center on campus next to Willett Hall.

The donation, according to officials of Longwood University in a news release, came from Joan Brock, of the class of 1964.

The Joan Perry Brock Center, in its early design stages, is set to finish construction by the spring of 2022, according to the release.

Preliminary estimates for the total cost for the building, according to the release, is estimated to range between $35-$40 million. Construction and additional financing is set to be overseen through the Longwood University Real Estate Foundation.

The new building is projected to be located on the current site of Longwood’s tennis courts, which will be relocated this summer a few hundred yards to the south, off Brock Commons but still on central campus, according to the release. Initial design schemes call for an elegant passageway to run between Willett and the new building, creating a convenient route connecting Brock Commons and the Curry and Frazer residence halls, which are currently being remodeled, according to the release.

Brock, a philanthropist, and her late husband Macon’s previous donation to Longwood, which had been the single largest donation prior to Wednesday’s donation, included $5.9 million in 2016, used to create programs for students allowing them to travel across the country to study cross-disciplinary civic challenges, and to create Brock Commons, the pedestrian walkway on campus.

The center will serve as a home for Longwood’s men’s and women’s Division I basketball programs, seating between 2,500 and 3,000 people.

“It will provide a significant upgrade from the Lancers’ current space in Willett Hall but maintain an intimate scale that facilitates an electric atmosphere by keeping fans – and especially students – close to the action,” the release cited.

“Longwood is set apart by its sense of community, camaraderie and togetherness, which have shaped graduates down through the generations, and that is something Joan understands profoundly,” Longwood President W. Taylor Reveley IV said in the release about the center. “We are so deeply grateful, humbled, and energized by the generosity of this gift and by Joan’s commitment to support those ideals. This center will be a beautiful, elegant addition to the center of our campus, and its benefits will redound to countless future students as well as our broader college-town vibrancy.”

The announcement comes at the heels of the opening of The Norman H. and Elsie Stossel Upchurch University Center in October 2018, an 84,000-square-foot center that includes office spaces for campus departments, spaces for student organizations, the Susan Soza Ballroom and four dining options.

“This is a great day for Longwood and for all of Farmville,” Farmville Mayor David Whitus, class of 1983, said in the release. “It will be a tremendous addition to our community to have a place in the heart of town where our community can gather that will attract visitors to the region and that will make this an even more fabulous community in which to live and work.”

Brock said in the release the center could further the opportunities for Longwood students, faculty and the Farmville community.

“I’m pleased that it’s going to be a focal point for the whole community to interact, not just Longwood,” said Brock. “It will be a rallying place. Those shared experiences are very important, locking arms with your neighbors, going forward together with a common goal. I’m delighted just thinking about the opportunities on campus that students will be able to walk to. And it’s going to be such a bonus for the broader community – speakers, concerts, shows. It’s going to give the whole region an opportunity to come together. President Reveley has been such a great catalyst, visionary and strategic thinker for the school, and Longwood is really a place that is moving forward.”

The center’s mission to host the university’s Division I basketball program comes after Longwood men’s most successful overall season of the Division 1 era, winning 16 games and earning its first-ever postseason berth, which included a 90-68 upset win over Southern Mississippi in the CBI Invitational, according to the release.

“This is truly a transformative day for Longwood University, Longwood athletics and the future of our men’s and women’s basketball programs,” said Interim Athletics Director Michelle Meadows. “The Joan Perry Brock Center takes us to a championship level in our ability to recruit and compete, while providing our students, fans and community a venue they can be proud of and a place to share and display their collective Longwood spirit for years to come. We wish to extend our deepest thanks to Mrs. Brock for her belief and investment in Longwood’s future.”

The building could also be designed to support a possible future opportunity for Longwood to host a national general election debate, according to the release, similar to as it had in 2016 with the U.S. Vice Presidential Debate, which took place in Willett Hall and attracted more than 2,500 journalists from around the world.

Reveley confirmed the university is not putting its name forward to host in 2020 due to various construction projects taking place on campus.