Lancers press on through adversity 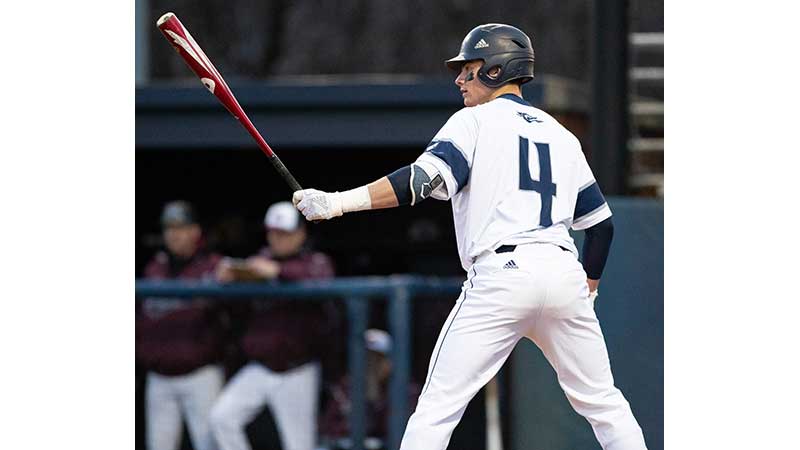 There is a locally sourced highlight among others for Longwood University’s baseball team this season, but it has been an otherwise rough campaign thus far overall, and the reasons for it are clear.

“We’re obviously off to a very slow start,” Lancers Head Coach Ryan Mau said. “It’s not the start we envisioned. We had some misfortunate things with some injuries, sort of missing a couple very key pieces to our pitching staff, and that’s where our biggest disappointment has been so far is on the mound, and that’s a tough one to overcome.”

The Lancers are 9-23, including 4-8 in the Big South, entering Friday’s 6 p.m. game at High Point University.

Encouraging signs are cropping up, though.

“Offensively, I like the way we’re trending,” Mau said. “We’ve started to figure some things out. The last couple weeks, we’ve started to score runs in bunches and put up decent numbers, but still our biggest flaw is our inability to throw strikes out of our bullpen, so that’s a killer and that seems to be the thing that’s letting games get away from us.”

The coach noted that two key injuries and one player being ineligible for academic reasons has collectively hurt what the Longwood pitching staff was supposed to look like this season.

“So it’s kicked a lot of people out of roles that we envisioned them being in and trying to force them into roles that they’re not comfortable and, so far, not capable of filling,” Mau said.

One of the injured players is senior Cody Boydstun, who was the Lancers’ No. 1 starter.

“He went down seven days before opening day, and he was projected to be our Friday night guy, so that was a huge hit,” the coach said. “And then we had a freshman who is currently sidelined, Gage Williams.”

Leading the charge on the positive side of the season for Longwood is former Fuqua School standout Hunter Gilliam.

Through 32 games, Gilliam has a .303 batting average and is leading Longwood with 36 hits and 19 RBIs.

“For a freshman to come in and put up the numbers he’s putting up thus far is really impressive, and his versatility, because he’s swinging the bat as well as he is, we’ve played him in multiple positions,” Mau said. “At this point he’s played outfield, he’s played first, he’s played second, he’s even pitched. So he’s a huge asset, and the future is bright with him.”

Also standing out for the Lancers on offense is junior Antwaun Tucker, though he has not escaped injury this year.

“Antwaun Tucker was sidelined for a month in the middle of the season there for us,” the coach said. “He went down at Hawaii with an injury, and he was hitting over .400 at that point, so you lost your shortstop and our top hitter for a four-week span. We just got him back and glad to have him back, because he’s the guy that does it in the middle of the field for us, he’s the leadoff hitter, and he’s obviously one of our best bats. So getting him back was kind of that last piece to the offense that made us function like I thought we would.”

Mau also praised redshirt junior catcher Carlos Garrido for swinging the bat well. In 28 games, he has a batting average of .284, with 25 hits and 15 RBIs.