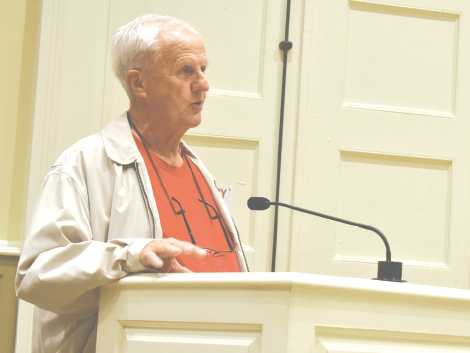 EMILY HOLLINGSWORTH | HERALD Resident Tom Leatherwood shared his experience with loud music played near his residence during a public hearing about a new noise ordinance.

A reworked county ordinance may add some teeth to how law enforcement can respond to noise complaints in Cumberland County.

Members of the Cumberland County Board of Supervisors voted Tuesday to approve a new noise ordinance, which would have the potential to be enforced to a greater degree, according to County Administrator and Attorney Vivian Seay Giles.

Giles said the prior noise ordinance from the county was considered unenforceable, and presented a draft of the new ordinance for consideration.

Documentation from the new ordinance cited that it is intended to “promote an environment for its citizens free from noise that jeopardizes their health or welfare or degrades the quality of life.”

Prohibited sounds include music or other noise that is plainly audible at 50 feet or more from a property boundary, according to the draft ordinance.

There are exemptions to the noise ordinance.

Sounds generated by land uses granted by the board of supervisors through conditional use permits and festival permits are exempt from the ordinance. A few speakers asked if this would apply to the Green Ridge landfill.

Speaker Ronald Tavernier expressed concern about trucks entering the county and traveling to and from the landfill, particularly related to trucks’ engine braking systems, such as jake brakes.

Tavernier said while some brakes of that nature are used when traveling uphill or in mountainous areas, he said they are unnecessary when traveling on flat land and can create excessive noise.

District Three Supervisor Kevin Ingle said the board would look into that issue.

Emergency services alarms and sirens are exempt, as well as bona fide agriculture and hunting activity such as animal sounds or shooting in the case of hunting. Or any construction activity that occurs between 7 a.m. to 9 p.m., or any landscaping noise, such as from lawnmowers and leaf blowers, that occur between 6 a.m. to 9 p.m.

Factors such as the time of day the noise occurs, the frequency of the noise, and potential to bring the noise into conformity would be examined by the board when determining the potential to grant a variance.

Six total people spoke during the public hearing for the ordinance.

Speakers Carol Miller and Tom Leatherwood conveyed noise complaints, including music played so loudly at adjacent properties, or from vehicles driving down the road, that they can shake their windows.

“I just hope we can do something about it,” Leatherwood said.

Nicole Patterson, a resident in the Anderson Highway area, complained about a neighbor who she said uses a generator at all times of the day or night. The noise, Patterson said, keeps her and the neighbors awake.

She said she has contacted representatives of the county and police, and spoke to the neighbor directly, and who have said they could do nothing about it.

“It’s just a runaround,” Patterson said about the process. “I’m just tired of not being able to sleep … when the police come out there, something should be done.”

Ingle encouraged the board and sheriff’s office to look further into the situation at Anderson Highway.

District Five Supervisor Parker Wheeler asked Sheriff Darrell Hodges asked if there were any items in the ordinance that shouldn’t be in there.

Hodges said he and county administration reviewed the ordinance, and he said there doesn’t seem to be any items in the ordinance that can’t be enforced.

“I think it will be a huge benefit to our department,” Hodges said. Prior to the new ordinance, he said police could only ask residents to turn down music, as nothing could be enforced