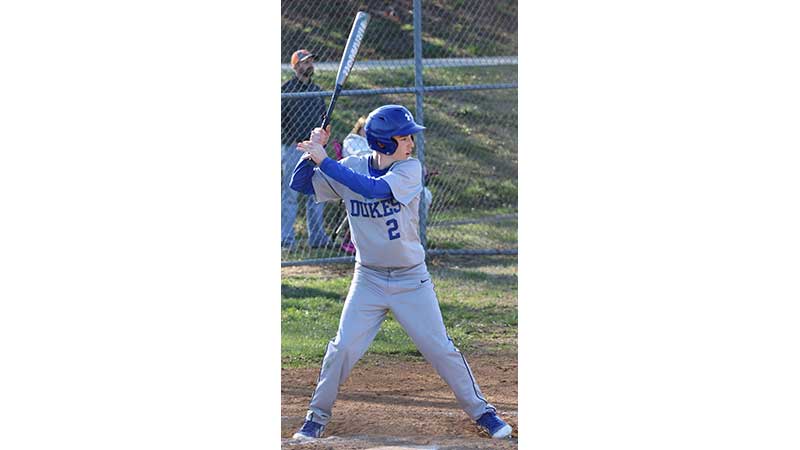 Cumberland County High School’s Jason Cooke returns this year for his junior season and is expected to make an impact offensively in the top half of the batting order. (Photo by Titus Mohler)

Cumberland County High School’s varsity baseball team is coming off a 2-17 season, returning every player but featuring a new coach.

“I have been playing baseball since about 4 years old, like most high school baseball coaches, I’d imagine,” White said. “I played here at Cumberland (County) High School from 2002-06, serving as a captain during my senior season. Since high school, I have umpired for the Cumberland Rec League and served as an assistant (junior varsity) baseball coach at Prince Edward (County) High School from 2012-15.”

White is just getting his bearings in his new coaching role.

“With this being my first year back at Cumberland in my career and the very limited practice time we have had so far this season due to the weather and field conditions,  I haven’t a full picture of what the team will look like once the season gets going,” he said. “Having said that, I am optimistic about this season.

“I have seen our pitchers throw bullpen and during our scrimmage game in Altavista, and we definitely have some good arms on the mound and some guys that can certainly handle themselves at the plate,” he continued. “I have tried not to put a number on how many games I think we can win, but I fully expect the team to be very competitive in the (James River District) this season.”

This year, Cumberland’s varsity team is made up of five seniors, four juniors and two sophomores.

White can already see a rotation of players that may play on the mound.

“I was impressed by all four of the pitchers we threw against Altavista,” he said, citing that those pitchers were senior Tristan Stinson and juniors Jordan Smith, Cal Smith and Jason Cooke. “They combined for 10 strikeouts in five innings, and (I) have been impressed by some of (the) bullpen sessions I’ve seen from others.

“Tristan Stinson is most likely going to be the workhorse of the team this year,” White said. “He has the ability to touch low 80s with his fastball, can change speeds well and has a pretty good hook.  Although I wouldn’t be surprised if Jordan Smith, Cal Smith and Jason Cooke end up impressing everyone with what they can do on the mound.”

The coach noted that he has not seen his players compete against much live pitching yet, but “I can tell that this team will need to get it done up and down the lineup. Some days we will have production from the top-of-the-order hitters like a Jason Cooke, Cole Fillman or Tristan Stinson, but on others, we are going to need some of our younger guys, like Addison Boyles or Alex Parker, to come up with a big hit at the bottom of the order.”

White said he thinks the strength of Cumberland’s defense is up the middle of the field.

“I have a veteran catcher in Cole Fillman who can handle the pitching staff and has a pretty good arm behind the plate; I have faith in any of the fielders I would put up the middle like Jordan Smith, Braden Gillman, Alex Parker and Caleb Johnson; and then Jason Cooke is a fantastic center fielder,” the coach said. “What I’m looking for from these gentlemen is consistent execution on the routine plays, and I think they can get it done.”

“Our matchups against Prince Edward and Amelia this week and then against Nottoway and Central Lunenburg next week should let me know how we are shaping up,” White said.