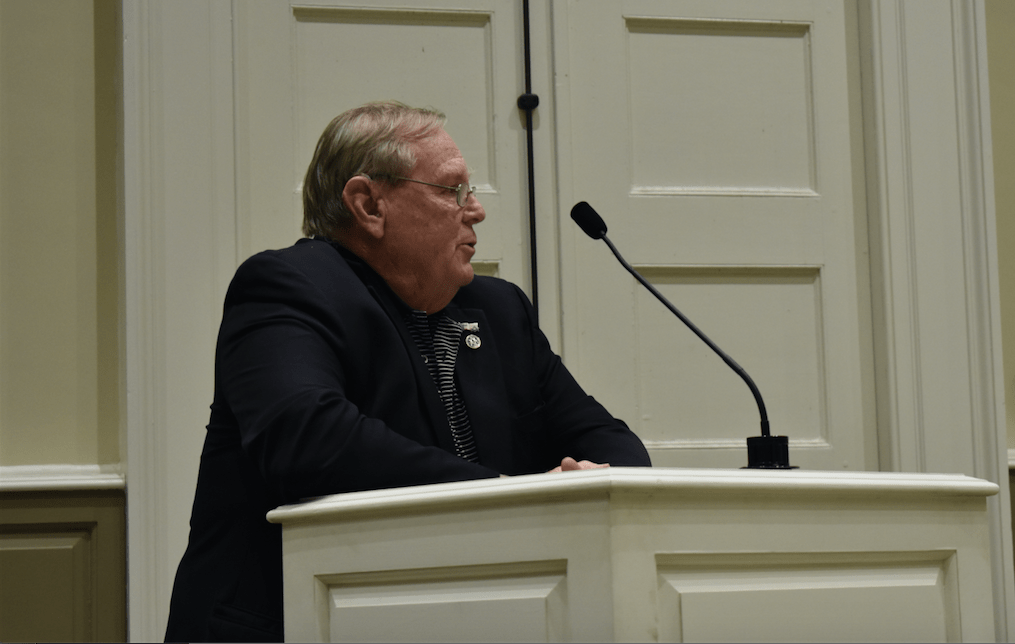 EMILY HOLLINGSWORTH | HERALD John Godsey, a real estate agent speaking on behalf of the property owner, addressed the Cumberland Board of Supervisors during a meeting to discuss rezoning parcels on Almond Lane.

Four parcels in the Mill Race subdivision on Almond Lane totaling 83.4 acres that had industrial zoning due to the proposed Allied/Republic landfill have now been rezoned to Agricultural-2.

Members of the Cumberland County Board of Supervisors unanimously approved the rezoning request following an information-heavy and at times tense public hearing Tuesday.

Five members of the public spoke during the hearing, which included applicant John Godsey, a real estate agent who spoke on behalf of the property owner.

The rezoning request was recommended for approval by the Cumberland Planning Commission at the end of February.

The four parcels are among 13 lots in the subdivision, located on Almond Lane off French’s Store Road. The remaining lots are also zoned A-2.

Duncan said the application initially requested three lots, but Duncan advised him to add four lots in order to include a small parcel zoned M-2 to prevent a randomly-zoned M-2 parcel among A-2 zoning.

Godsey said two parcels off Goshen Road, near the Almond Lane parcels, measured 195 and 66 acres respectively, are under a contract that is expected to be finalized by mid-April. The two parcels are zoned M-2. Godsey did not disclose the purchaser of the property, but said the purchaser is a resident of Cumberland County.

Speaker Tim Kennel said he was opposed to the rezoning and expressed concern about random or “spot-zoning” in the county and the potential to bend the comprehensive plan to conform to large-scale projects.

“Why isn’t Cumberland rezoning all of the property associated with Republic?” Kennel said. “All of it should go back to A-2.”

Kennel said attempts to learn about the litigation results between Republic and Cumberland have not been successful due what he cited as lack of response from the county.

“We the citizens have the right to know about these issues before they are approved,” Kennel said. “Trust aboslutely comes with truth, not conjecture.”

Speaker Barbara Speas asked that the rezoning not be approved until the Green Ridge landfill has been established.

District One Supervisor William “Bill” Osl asked Giles a few questions, including whether the county could approve a rezoning permit without an applicant and if there was any connection between the Green Ridge landfill and the Republic property.

County Administrator and Attorney Vivian Seay Giles said the county has initiated a rezoning once or twice with the permission of the landowner because the land was zoned in an odd way that was at no fault of the landowner.

Osl and a few people who attended the meeting asked whether there was a timeline between when a rezoning application was initially submitted and when it could be approved, as the initial application for the four parcels being rezoned was made in 2016.

Giles said there is a timeframe between when the planning commission recommends an item and when the board of supervisors approves it, but said the time period can be extended at the request of the applicant.

Specifically concerning the four parcels, Giles said, “we suggested to the applicant that if they would request a deferral until the other issues could be resolved, then the matter could go forward without them having to re-do the paperwork, without the county having to re-process the paperwork.”

Giles said the application remains valid in spite of the timeline.

Giles said there was not a connection between the Green Ridge project and Republic Services that she was aware of and said the projects were separate and distinct.

Osl said projects in the county allow for an “economic base” to be established in order to bring businesses to the county such as a grocery store.

“If you don’t have some increase in the economic development of Cumberland County, we never could get a grocery store,” Osl said.

Speakers during the hearing and public comment period expressed frustration toward the county for communication during the rezoning process that was cited as unclear at times and non-transparent.

Resident Beverly Speas said there was “stunning lack of clarity” concerning the rezoning application and decision.