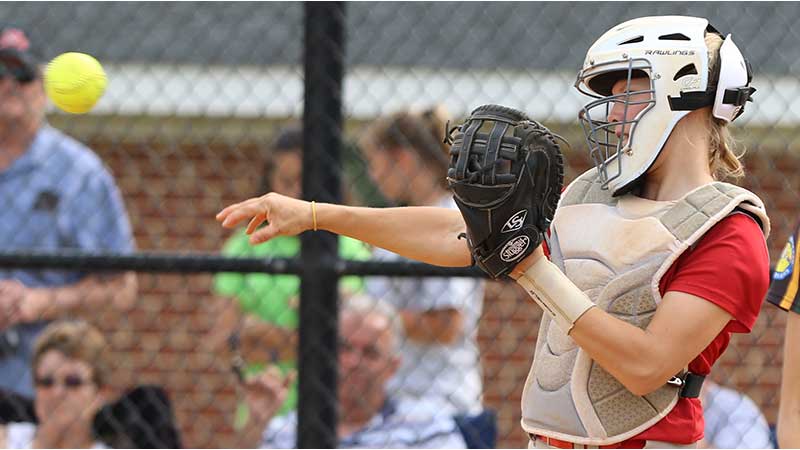 Fuqua School catcher Carmen Reynolds returns for her junior season this year, looking to help the Lady Falcons repeat as the VISAA Division III state champions. Her bat on offense and her arm on defense will once again be key to Fuqua’s efforts. (Photo by Titus Mohler)

Fuqua School’s varsity softball team enters the 2019 season this week with a highly experienced roster and a simple but ambitious goal — to repeat as state champions.

That Lady Falcons team that went 16-5 overall returns almost every single player this year, with most of them set to write the final chapters of their high school careers.

“The girls have come in and worked hard, and I like their focus,” Ford said. “They seem very focused this year, which I’m very pleased about.”

They will need to be focused as their regular season road will not be easy.

“Once again, we have a fairly strong schedule, so it’ll be challenging through the season, and hopefully (we’ll) be peaking at the right time come playoff time,” Ford said.

Highlighting some of the notable challenges, he mentioned a road game against Tunstall High School, a Virginia High School League Class 3 team.

“I think they’ve got some talent on that team,” Ford said.

That game will be played April 25.

“Of course, we’re in the St. Margaret’s tournament, and we’re playing Nansemond-Suffolk in a doubleheader and home and away again with Isle of Wight,” Ford said. “I think we’ve got Collegiate. We’ve got some pretty respectable teams we’ll have to come up against this year.”

The Lady Falcons are set to open the season with a rematch of last year’s state championship game. They will visit Kenston Forest School on Wednesday at 4 p.m.

Familiar faces will occupy the circle for Fuqua, with the pitching staff once again led by Ware, who plans to play softball at the next level as well. Ford said Hannah-Gray Schmidt and Haney will both log some time pitching as well, and both of them may also choose to play college ball.

The Lady Falcons will be without now-graduated center fielder Alexa Marzloff, who also provided a reliable bat in the lineup.

“We’ll miss Lexi, but we have Kayla Gurley and Madison Pribble and Meredith could all put in some time in the outfield,” Ford said. “Of course, the whole infield is back, which is nice.”

The returning infield will generally include Ware in the circle, Malone at first base, Bickford at second, Haney at shortstop, Hannah-Gray Schmidt at third and Reynolds behind the plate as catcher.

Malone, Bickford and Reynolds all plan to play college softball, the coach confirmed, and others, including Hodges, are considering multiple playing options at that level.

Offensively, Ford said that he expects “as the year goes on, we should slowly be getting stronger and stronger with the bats.”

The coach said Ware and Reynolds led the way last year on offense, but he highlighted how players will likely have their ups and downs, with one compensating for another in an overall team effort that stretches across the season. This will likely lead to numerous opportunities for all of Fuqua’s players.

And he has been pleased with how consistently high the talent level is on the team, something he noticed in a recent practice.

“A couple girls were out sick, and you plug a couple other girls in, and you’re just not missing a beat,” he said. “The girls have become good softball players.”