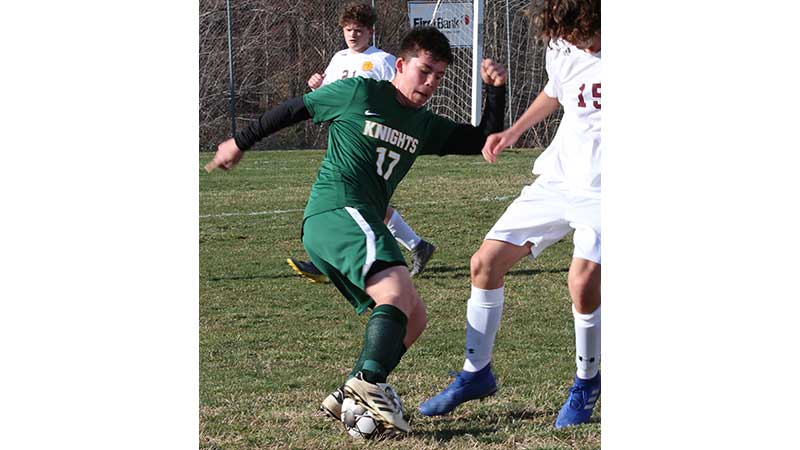 Buckingham County High School junior Joshua Reynolds is part of a stellar defensive group for the Knights that Head Coach Brett Whittington said has “done an outstanding job so far this year.” (Photo by Lyla Wood)

Buckingham County High School’s varsity soccer team is breaking the mold it has established in recent years, wasting no time in delivering strong play on the pitch.

The Knights opened the season March 11 with a 2-1 home win over Amelia County High School. They tied host Central Lunenburg High School 1-1 on March 13, and then they shut out visiting Nottoway High School on March 18, 3-0.

Prior to Spring Break, the Knights faced talented Goochland High School on the road March 20 and fell narrowly, 3-1.

“They’re playing really well,” Buckingham Head Coach Brett Whittington said of his players. “The last two years, we’ve gotten off to really slow starts. I think we’ve won five games combined in the last two years, so to be 2-1-1 after the first four is really a good feeling.”

Last season, Buckingham went 4-9-1 overall, including a loss to James River High School in the first round of the Region 2C playoffs.

The Knights are pressing on without two of their captains from last year, as Ethan Caldwell and John Crews III graduated.

This year, Buckingham’s team is a union of the varsity boys and girls programs, though only one girl is currently on the roster. The squad is made up of seven seniors, four juniors, six sophomores and four freshmen.

Whittington has great optimism regarding his team’s prospects this season after its outstanding start.

“If we can maintain what we’re doing now — the same intensity and the same level of concentration — we’ll be doing OK,” he said. “They’re already head and shoulders above where we were at this time last year, so for this team, as far as if they want to put the effort in, (the) sky’s the limit.”

“Right now, Manny Whittington, my son, is leading the team in scoring with four goals,” the coach said. “He’s had one in each game. Joshua Codi is second on the team.”

In the midfield, “Overton Temple is doing a really good job of getting them the ball,” Coach Whittington said. “He’s a senior. He’s one of our captains.”

The other standout in the midfield is sophomore Wesley Snoddy.