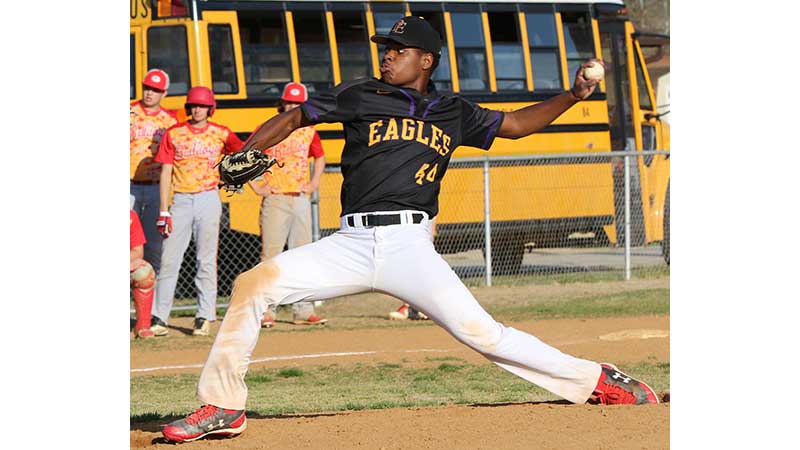 Prince Edward County High School’s Isaih Dailey returns for his junior season and is expected to lead the Eagles on the mound. He will also bat in the cleanup spot after leading the team in batting average last year. (Photo by Titus Mohler)

The Prince Edward County High School varsity baseball team showed itself to be competitive in the James River District (JRD) last season, finishing with a 13-9 overall record, and this year, the Eagles aim to be in contention for the district title.

“Each year is going to shake out different,” Prince Edward Head Coach Brandon Kenny said. “I do think we have a competitive group of guys and if we work hard, stay coachable and take a team-first approach, we can hopefully be in the mix at the top of the JRD. That obviously requires us to stay healthy as well.”

However, the Eagles will miss Corbett Bowman and Jaylen Reed, who were seniors in 2018.

“Corbett was one of our top pitchers on the mound, and Jaylen ended up working his way into the starting line-up and hitting leadoff for us,” Kenny said.

Despite their departures, though, Prince Edward has a bevy of talented players on the 2019 roster. The roster includes four seniors, five juniors, three sophomores and two freshmen.

“I really like our sophomores and freshmen to go with the upperclassmen,” Kenny said. “I think we have a nice blend that will hopefully make us better than last year. Overall, 1-14, this is one of the more talented teams I’ve been able to coach as an assistant or head coach. I really like our depth in multiple spots.”

In term’s of pitching, taking the spot at the top of the rotation for the Eagles is junior left-hander Isaih Dailey.

“He was a second team (all-district) pitcher last year as a sophomore and he continues to work to improve his off-speed and command of his pitches,” the coach said. “He finished strong in the fall on the mound.”

Kenny said junior right-handed pitcher Wade Jenkins will get a great deal of work on the mound this year for the Eagles.

“He did really well as our No. 3 man last year,” the coach said. “We look for him to pick up the innings from losing Corbett. He had a good fall on the mound; we look for him to build on it.”

“He got a taste of varsity last year, and the limited time on the mound, he threw it well,” Kenny said. “He has good off-speed (pitches) that he can locate.”

Freshman right-hander Nathan Reed joins the varsity squad after standing out in the fall as the starting quarterback of the varsity football team.

“Nathan Reed will be another quality arm for us this season,” Kenny said. “On the mound, he locates it well and has some good off-speed, especially for a freshman.”

The coach said that other pitchers Prince Edward can use, depending on the situation, include senior right-handers Cody Kitchen, Brandon Orange and Austin Mahan and sophomore right-hander Matt Kinne.

Dailey will also lead Prince Edward at the plate and in the field.

Kenny noted that Dailey “returns after being selected to the JRD first team outfield last season. He will bat in our cleanup spot. He led the team in batting average last year.

“He committed to VMI this past fall; all the players and coaches were really happy for him,” the coach continued. “He’s a talented player but also works at his craft. He can swing it, and he can run.”

The coach gave praise to third baseman Austin Mahan, who he said was solid and consistent at the plate and who hit much better last year than the numbers say.

Junior first baseman Kaleb Hensley drew recognition from Kenny because he “was one of our most consistent hitters last year and led the team in RBIs. He doesn’t strike out and uses the whole field to hit.”

Highlighting a freshman, Kenny said, “Michael Dailey played with us in the fall, and he showed he belonged. He’s a left-handed hitter with some pop, and he can run as well. I don’t see him struggling too much to adjust to the varsity level.”

The coach said Jenkins and sophomore catcher Johnny Ray Holman Jr. are additional players that put together good at-bats and keep the strikeouts down.

“I like our lineup, top to bottom, no easy outs,” Kenny said. “These guys battle, and we expect to have production at the bottom of our lineup, which will hopefully lead to us having some big innings this year.”

On defense, Kinne will play shortstop, the coach said after citing that Kinne has better arm strength now.

“Wade Jenkins and Johnny Ray Holman Jr. will catch for us,” Kenny said.

The Eagles were set to visit Cumberland County High School on Tuesday, and they return to action Thursday at Bluestone High School at 5 p.m.

Noting a key opponent, Kenny said, “Goochland has been to states the last three years, they are the measuring stick. If you can compete with those guys, you can compete for the district and potentially make a deep playoff run.”