The Democratic Party of Virginia (DPVA) recently announced Prince Edward County native Taikein Cooper as the recipient of the 2018 Grassroots Award for the 5th Congressional District. 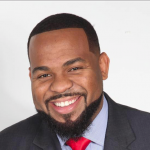 “Congressional District Committees across the Commonwealth selected an awardee in their district whose tireless volunteer efforts in the 2018 election cycle exemplified the spirit of our party and helped push Virginia forward in their community,” a recent press release stated.

The DPVA Grassroots award comes as another in a long list of awards and recognitions of what has become a life of service for Cooper.

His active participation in the political process began as a campaign volunteer for Travis Harris when Harris ran for Sheriff of Prince Edward County. Harris had been Cooper’s D.A.R.E. (Drug Abuse Resistance Education) teacher.

Cooper was 11 years old at the time.

During his college years, at the University of North Carolina at Chapel Hill, Cooper’s interests in political action and advocacy grew and found a voice. He led a variety of political action committees and organized and led a grassroots effort to Jena, Louisiana where the group protested, calling for justice for the infamous Jena Six.

He returned to his Prince Edward County home with a degree in Public Policy Analysis. Equipped with the proper tools for the job at that point, Cooper’s life of public service gained momentum.

According to the SVCC spotlight feature, He ran in a special election for Prince Edward County’s treasurer at the age of 24. The following year he was asked to run for US Congress in Virginia’s 5th Congressional District.

The Farmville Herald spoke with Cooper several hours after the DPVA announcement while, befittingly, he was the master of ceremonies for the 2019 Moton Community Banquet. The annual banquet is held to recognize donors for the Moton Museum and citizens for outstanding service and work in the community.

When asked what he thought the driving force was behind his efforts and long list of accomplishments, he replied, “Being a native Prince Edwardian, I was exposed to advocacy at a young age. I found my voice as a seventh-grader at Prince Edward County Middle School; I told a teacher that she was stifling my critical thinking and interest for learning. She agreed and cultivated my interests and passions. That experience empowered me to stand up for what I believed in, regardless of who I had to stand up to.”

Education advocacy remains a bull’s-eye on the target of his efforts today.

Just recently, Cooper was elected as Executive Director of Virginia Excels, a Richmond based education advocacy group that he, in fact, founded. According to their website, “Virginia Excels serves as a resource for information, facts and best practices in public education so that our entire community can access information about critical issues facing our students and schools.”

Cooper further explained his vision for the agency’s future, “Virginia Excels is a statewide, educational, advocacy organization. At our core, our goal is to amplify the voices of students and families to promote educational equity in the Commonwealth. In many ways, we are fighting for the same things that students fought for in Prince Edward County in 1951. Virginia’s schools aren’t equitable. We launched a parent advocacy program last fall, and we are launching a youth ambassador program next quarter. We are hyper-focusing on Richmond’s Public Schools right now and expanding to another locality in 2020.”

When asked about plans for his own future, Cooper answered, “I’ve dedicated my life to serving others. At this moment, I’m working to amplify the voices of students and families from historically underrepresented communities to promote educational equity. To truly transform our public schools, we have to engage the voices of the people.”