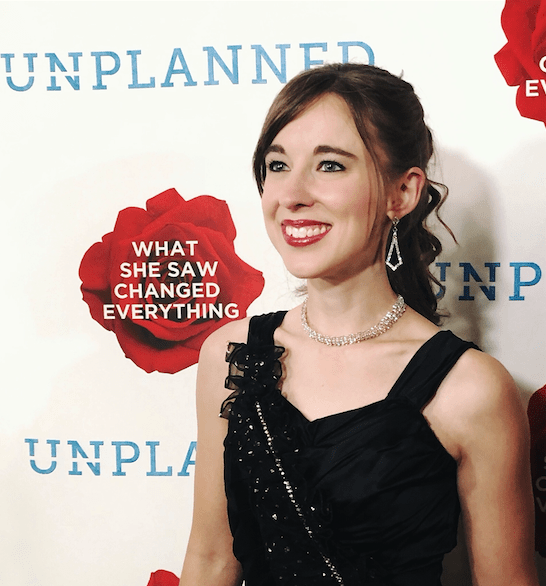 Local actress Stacey Bradshaw recently attended her first major red carpet premiere at the Chinese Theater in Hollywood. She plays a supporting role in the film “Unplanned” as Karen, a Coalition for Life volunteer. The film was made last spring in Oklahoma with a $5 million budget and tells the powerful true story of Abby Johnson, a Planned Parenthood director turned pro-life advocate. You can see “Unplanned” in theaters nationwide starting March 29.

“There are so many amazing stories surrounding this film,” Bradshaw says in a release. “Our lead actress, Ashley Bratcher, found out after she started filming that she was minutes away from being aborted when her mother chose life. And now she is playing the role of Abby Johnson.” Also, Mike Lindell, founder and CEO of My Pillow, was a major investor and even had a small role in the film.

Bradshaw continues, “The film does a beautiful job of humanizing both sides of the issue. The story is not one of judgement, but of hope, love and redemption. Johnson was very involved in the film and spent several days on set as it was being shot. She, and the others whose lives are depicted in the story, attest to the truth and accuracy represented on the screen.”

Despite the lack of language, nudity or sex, “Unplanned” has received a controversial R rating from the MPAA for “violence” in a scene depicting an abortion shown through an animated ultrasound and a scene where Abby is suffering from a chemically-induced abortion. The irony is not lost that a 15-year-old girl can receive an abortion in many states without her parents’ knowledge, but cannot watch a movie showing the realities of abortion without her parents next to her, according to the release.

The film releases in more than 1,000 theaters across the country March 29. Find screening locations and showtimes at www.unplannedtickets.com. To learn more about Stacey’s acting career and her other films, visit www.stacey-bradshaw.com.