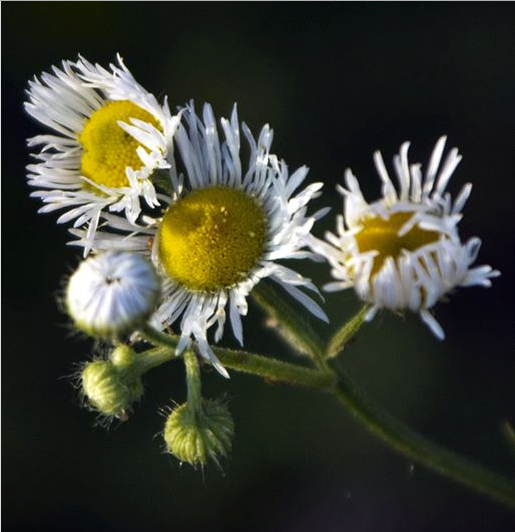 CYNTHIA WOOD Our native daisy fleabane is a popular garden plant in England.

We gardeners just naturally share plants. In fact, it’s not unusual for someone to have what’s fondly known as a pass-along garden. You know the kind. The hollyhocks came from dear old Aunt Lottie who loved the old fashioned single red ones. The primroses came from a neighbor who got them from a nursery that specialized in primroses capable of withstanding Virginia’s hot humid summers. And the boxwood and the roses? Well, they’re family heirlooms. The boxwood were rooted from clippings taken from ones at the old home place. The roses are an old highly fragrant red variety that grandma got from her mother and passed along to all of her daughters. She always claimed that they were far more disease resistant than modern varieties.

Early Virginians and folks back in England did the same thing. Settlers arrived with most of the tools, equipment, and seeds needed to start a typical English garden. They even brought herbs and medicinal plants, including the dandelion. Captain John Smith wrote home about the gardens here that would yield sallet in just one or two months after planting. Farther north, the Reverend Francis Higginson noted in 1629 that the governor of Massachusetts had pease as good as those in England and turnips, parsnips, and carrots that were bigger and sweeter.

These same gardening-obsessed settlers found new and unusual plants here and sent them their patrons and plants collectors back in England. In the early 1600s, John Tradescant, an English plantsman and garden keeper for several nobles, introduced a number of plants to England, including the red mulberry, shagbark hickory, tulip tree, red maple, yucca, fox grapes, sycamore, several ferns, black walnut, stag’s horn sumac, Virginia creeper, and his namesake Tradescantia virginiana or spiderwort. Even pitcher plants were sent back to England. Some introductions were more successful than others. Poison ivy was introduced in 1632 and daisy fleabane in 1633. While it’s unclear why John Tradescant thought poison ivy was worth sending to England, daisy fleabane has become a garden staple there. One person’s weed is another’s treasure.

By the 1700s, colonial cities were becoming well established. Having a pleasure garden was an important indication of wealth and standing in the community. Around the same time, John Bartram, a Philadelphia-based farmer turned botanist, began collecting plants up and down the East Coast. He corresponded regularly with plants lovers in England, including Linnaeus, who considered Bartram the world’s greatest natural botanist. He also established a nursery in Philadelphia. When Thomas Jefferson was in France, he sent Bartram a list of plants and seeds that he wanted sent to France for a friend. Jefferson was a very avid proponent of native American plants.

Not all requests, however, were for native plants. Jefferson, Washington, and Lady Jean Skipwith of Prestwould Plantation near Clarksville were all interested in keeping up with the latest gardening trends. They sent their agents in England and nurserymen like Bartram long lists of plants that they wanted – narcissus, tuberoses, hellebores, autumn narcissus (Sternbergia lutea), Gallica and Rosa Mundi roses, and tulips. While the tulip craze in Europe had quieted, these exotic flowers were still very fashionable here. So much so that William Faris of Annapolis, Maryland, noted in his diary that he had more than 2,000 tulips in his garden. Striped French marigolds were considered a must have plant too. They had been written about in William Curtis’ Botanical Magazine in 1791, so every well-informed American gardener knew about them and coveted them too. Not surprisingly, Lady Jean asked her agents and Prince Nurseries on Long Island to procure some for her.

And so today after much sending of plants back and forth from here to England, we have poke berries growing at Kew Gardens and dandelions growing everywhere here. Daisy fleabane is considered a fine garden perennial there but is only just beginning to get attention here as a garden plant. Pass along gardening on a global scale.

CYNTHIA WOOD can be reached at cynthia.crewe23930@gmail.com.