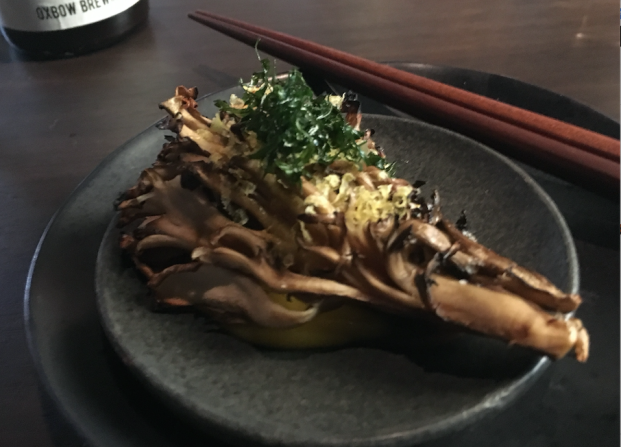 The hen-of-the-woods makes a very elegant first course at a dinner party.

Blue Mushrooms and Hens for Dinner

When I was a kid, about a 1,000 years ago, mushrooms were an exotic food that came in small cans. They were precooked, brownish gray and generally devoid of flavor. Sometimes when my parents were trying to be fancy, they bought these tasteless wonders to add to gravy or green peas. They were strictly for decoration, not flavor.

I don’t ever remember eating a fresh mushroom until I was in graduate school in Spain. Fresh mushrooms lightly sautéed in olive oil and added to an omelet were a revelation. After I returned to Charlottesville, I distinctly remember dinner at another graduate student’s apartment because she served mushrooms as a side with steak. She boiled the mushrooms in water for 20 minutes and eventually produced something that looked just like those tasteless gray things that my parents occasionally bought. Horrors.

Over the years, I explored ways to cook mushrooms — stuffed with ham and breadcrumbs; grilled and eaten as a meat substitute; pickled; and stir fried with vegetables and a spicy sauce. It was only recently, however, that I tasted wild mushrooms that had been collected locally. Why? Because there’s considerable risk involved in picking and eating wild mushrooms if you aren’t an expert in differentiating the edible ones and the poisonous ones. Yes, a mistake can be fatal.

Several years ago, a friend harvested and cooked some puffballs, which a colleague assured him were quite safe to eat. They were interesting, but not the most exciting thing I had ever eaten. They had a spongy texture that I didn’t find appealing and not much flavor. Nevertheless, if you add enough cream and sherry, anything tastes excellent, puffballs included. Just recently, I had two additional encounters with locally foraged mushrooms.

The first involved hen-of-thewoods (Grifola frondosa), a mushroom that typically grows at the base of oaks and can be quite large. My hen-of-thewoods was served by a local restaurant that has a reputation for featuring foraged edibles. The chef cut the hen-of-the-woods into thick slabs, seared them and served them with a sous vide cooked egg yolk sauce and a generous dash of soy sauce for extra umami. It was transcendent.

And then several months ago, a friend invited me to go for a walk that involved looking for mushrooms. He’s an expert and knows what’s safe to eat and what not to touch. At a location that shall remain secret, we found these beautiful blue mushrooms (Smurf blue, to be precise) growing on a steep bank. They were indigo milk mushrooms (Lactarius indigo), which as their scientific name indicates, will ooze a dark purple milky liquid when cut. And, yes, they are seriously good to eat. Just sauté them quickly in butter, sprinkle with sea salt, and eat them straight out of the pan. If you can exercise proper adult style self-restraint, pile them on toast and share them with friends.

If you’re lucky enough to find this mushroom and have someone who can assure you that it’s safe to eat, I bet you won’t share it with anyone. Anyway, foraging is fascinating and a great way to learn about what’s growing in the woods. There are some local professional foragers who will take interested individuals on guided hikes. It’s a great way to experience nature and taste something different. Just remember that foraging for wild mushrooms isn’t for novices. It’s very important to know what you’re eating. Mistakes can be fatal. In the meantime, happy holidays, and please don’t boil the mushrooms.

As many of you know, I manage a Virginia Wildflower Community Page on Facebook. It has just under 2,000 members,... read more