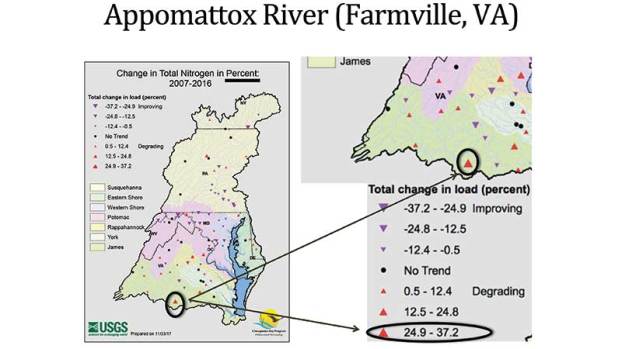 Pictured is a slide shown during a presentation from the Commonwealth Regional Council (CRC) detailing a trend that shows a higher percentage of nitrogen entering the Appomattox River in Farmville. The CRC, with the Virginia Department of Environmental Quality (DEQ) are looking at non-binding actions that counties can take to reduce nitrogen input into the river.

The last in a series of meetings organized by the Commonwealth Regional Council (CRC) about the Virginia Department of Environmental Quality’s (DEQ) Watershed Implementation Plan (WIP) explored potential ways to reduce high levels of nitrogen entering the Appomattox River.

The watershed implementation plan is a non-binding item, meaning that the state cannot enforce localities to participate. The plan acts more like a wish list to justify funding needs to the Virginia General Assembly.

As part of the plan, the DEQ created a Total Maximum Daily Load (TMDL) program for the Chesapeake Bay.

The TMDL was designed to help implement restoration efforts to lower pollutions in the bay and surrounding rivers and streams. The DEQ will submit the third phase of its watershed implementation program to the United States Environmental Protection Agency (EPA) later this year.

Regional localities can help with this effort, Cam Johnson, regional planner for CRC, said in a previous meeting in September, by creating Best Management Practices (BMPs), or efforts to reduce pollutants from entering area rivers.

On a regional level, rivers and streams that impact this study include the Appomattox River in Farmville, the James River’s course in Cartersville and Deep Creek in Mannboro.

Johnson compiled data from the DEQ’s 2017 findings for Cumberland, Buckingham, Prince Edward, Amelia and Nottoway counties, which calculate and project changes in levels of nitrogen, phosphorus and sediment for each county of what the levels could be in 2025 and the sources of the pollutants.
Johnson said in an email Thursday that the Appomattox River is experiencing high levels of nitrogen being emptied into it, “one of the highest across the Chesapeake Bay watershed, which is a bad thing.”

“In Phase III of the WIP, we directed our focus to that,” Johnson said about what participants explored during the meeting. “Much of what the WIP is centered around is trying to reduce those nutrient loads into the Appomattox River. We hope that by actively working with localities in the WIP, we can reverse that trend over the next couple of years.”

Johnson said the counties “have not committed to any regulations, or anything of that sort—the WIP is centered around less regulations and trying to get the localities engaged without having to do so. Localities appeared to be interested in maybe taking on some stream restoration projects if the funding became available for it.”

Halloween events set to be treats

Families in our Tri-County coverage area should expect a pleasant variety of Halloween celebrations in whichever county they celebrate the... read more