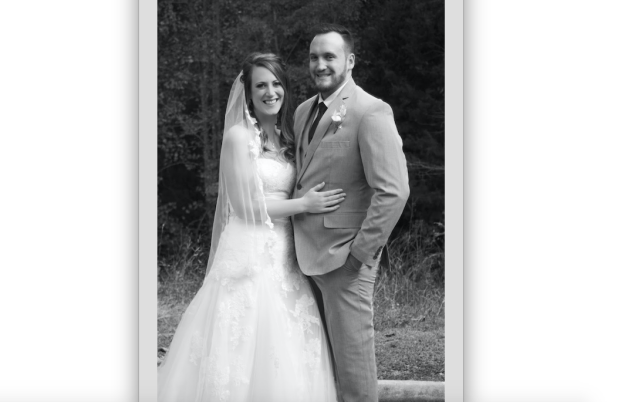 Hannah Christine Bartow, daughter of Mark and Becky Bartow of Farmville, Virginia was given in marriage by her father and mother to be married to Timothy Haden Einstein, son of Robert and Rita Einstein of Winchester, Virginia. The ceremony took place at New Life Church in Farmville, Virginia on Saturday, October 27th, 2018 at three o’clock in the afternoon. Officiating the ceremony was Reverend Alvin Thomas of Blacksburg, Virginia. A reception followed at the church.

As the bride was escorted by her father , she wore a strapless princess ball gown with a lace bodice and a multiple tiered tulle skirt with lace applique’s. The dress had a dazzling crystallized waistband with covered button detail accent down the back. She also wore a fingertip length bridal veil trimmed with lace applique’s that matched her dress. She carried a bouquet of flowers that included cream color peonies and dahlia, dusty rose cynara, pink tea roses with foliage of lamb ear and rose color eucalyptus. The handle of the bouquet was wrapped with the lace from her mother’s wedding veil. The bride also carried a lace handkerchief that belong to her great-grandmother, Goldie Taylor of Buckingham, Virginia.

Serving as Matron of Honor was Kristin Storment of Portland, Oregon. Melissa Dresser of Roanoke, Virginia served as maid of honor. Bridesmaids were Elizabeth Bartow, sister of bride, Sherri Davenport, Kelly Leslie, all from Farmville, Virginia and Tabitha Lashley of Houston, Texas. Flower girl was Paige Lancaster, niece of the groom from Berkeley Springs, West Virginia.

Tim and Hannah would like to say thank you to everyone who joined them in celebrating their marriage. A special thanks to all the friends, family and church family for going out of their way to help in all the details leading up to the wedding. You were a blessing!

After their honeymoon, the couple resides in Christiansburg, Virginia.