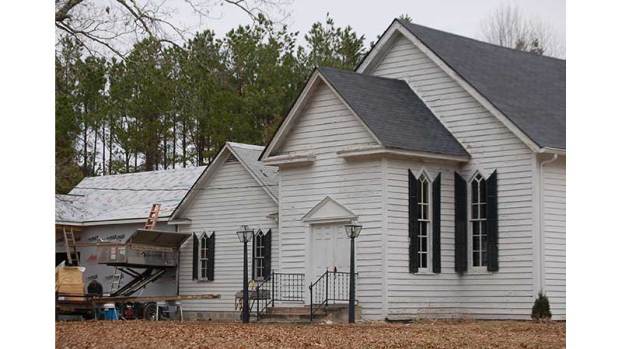 Pictured is the former church that is set to open as Salem Chapel and Event Center on 327 Rice’s Depot Road. This photo was taken in December 2017, shortly after renovations began on the building. (Photo by Emily Hollingsworth)

Along Rices Depot Road, an aging church building will now serve as an event venue for anyone looking to hold weddings, family reunions or birthday parties.

Caryn Kayton, who owns Caryn’s Bridals on 233 N. Main St., has lived across the street from the building since 1982. The building was a church that was showing its age and wear.

Kayton eyed the building for several years, she said, but did not see anyone purchase it.

Kayton said she “wanted to rescue it.”

She bought the building six years ago, which will now open as Salem Chapel and Event Center. Kayton said she did not begin the process of renovating the former church until last year.

She said the renovations of the building on 327 Rice’s Depot Road included cleaning up the outside, strengthening the electrical work and renovating the inside of the church.

An open house for the event venue sponsored by the Farmville Area Chamber of Commerce is scheduled for Monday, Nov. 5, at  5:30 p.m.