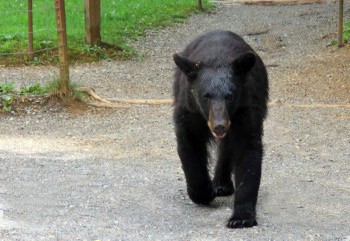 We plant people tend to be a crazy, obsessive bunch. We plant the same variety of tomato that our grandparents did even though it’s finicky and not very tasty. We’ll persist in growing a favorite plant even in the worst of circumstances. We’ll drive for hours to purchase an unusual plant that we’ve been coveting. Yes, we’re a single-minded bunch, prone to irrational behavior.

Several weeks ago, I got a message from a lady on my wildflower community page on Facebook. She described herself as being of a “certain age,” round, and somewhat slow moving. Several days earlier, she had been on a walk searching for a particular plant. When the lady found one in bloom, she knelt on the ground and became totally immersed in examining and photographing it. Suddenly she had a strong sense that she was no longer alone. She looked up and found herself staring into the eyes of a large black bear. When the bear continued to observe her without moving, she quickly took a photo and then she and the bear calmly walked off. Nerves of steel? Foolhardy? You choose. The lady described the event as just another day in the woods.

And then there are the gardeners who are obsessed with growing corn. A friend, who used to live on Daufuskie Island, knew someone on the island who was determined to grow corn even though the odds were totally against him. There is a large deer population on the island, and, of course, they love corn. The poor man tried electric fences, various noise emitting devices, even scents that deer are supposed to dislike. Nothing worked. Until the frustrated gardener had a brilliant idea. He plowed an area large enough for a sizable patch of corn, built a wire mesh fence 12 feet tall around it, and then…completely covered the top with more wire mesh. Yes, a garden plot inside a wire mesh box that looked like a secure government listening outpost. Did it work? You bet! Did the neighbors talk? Absolutely.

Even experienced British gardeners get themselves into trouble when they try to grow corn. Corn on the cob is a new concept there. It’s beginning to show up for sale in farm shops, but home gardeners really don’t know how to grow it. And it’s complicated too because the growing season is short. Two summers ago, a friend decided to add corn to his vegetable garden. He only planted two short rows. By late summer, he figured the corn must certainly be ready to harvest. That’s when I got a series of text messages inquiring as to how he would know when to pick the corn. More questions than I ever imagined that anyone could ask about picking corn. And then one final question came through: when would the corn turn yellow. Mr. big deal gardener didn’t know about white, yellow, and bicolor corn. He thought corn turned yellow when it was ripe. He finally harvested half a dozen ears, but was afraid to eat them. The ears weren’t completely filled out with kernels of corn. In fact, they were very spotty. Corn is wind pollinated and the poor man hadn’t planted enough to ensure complete pollination.

Yes, we gardeners are a funny bunch, and I’m as guilty as anyone. I insist in planting Aechmea blanchetiana in my garden every spring. It has a beautiful shape and, if properly neglected, turns bright orange in the summer sun. So, what’s the problem? There are several: it has saw-like teeth along the edges of its leaves that sometimes attack visitors. Long sleeves and gloves are essential for transplanting or moving it. The other problem is that it isn’t hardy here, so in late summer I have to dig it up, separate the pups, and then board it someplace warm. It’s a lot of trouble for a plant that attacks.

Yes, we gardeners are a funny bunch, but I suspect we aren’t going to change and are probably proud of our eccentricities.

Eat local: Grow your own