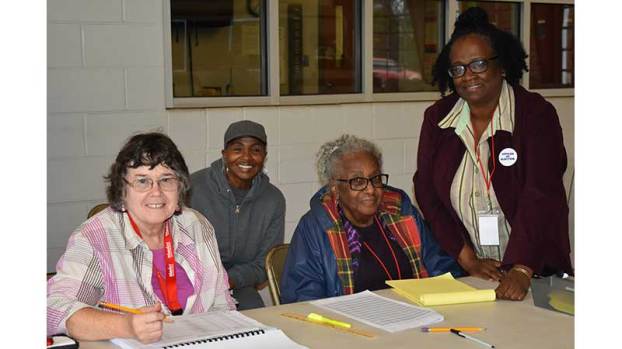 By Emily Hollingsworth and Titus Mohler

See results for local elections below:

“I’m so grateful and humbled to receive this opportunity and to be one of the faces of Buckingham County,” Midkiff said in a statement on his social media page Wednesday. “The New Frontier will continue for Buckingham with this spark.”

“Words cannot express my sincere appreciation for everyone’s support in this election,” Martin said in a statement Wednesday. “I thank God for allowing me this opportunity and I am so grateful for the confidence that the Cumberland County citizens have instilled in me. I look forward to upholding the legacy of previous clerks as well as establishing relationships with our citizens here in Cumberland County.”

Southall applied to fill the Farmville 101 District Supervisor seat and was appointed by judges to fill it in May. The seat was previously held by the late Howard Simpson, who had served on the board for 27 years. He died Feb. 13.

Southall came to the position with a long history of public service in the county. He had served as Prince Edward County Sheriff for 24 years before retiring in 2000. He noted he has lived in the county for his entire life and in the Farmville 101 District for 12 years.

All precincts have reported for the Lockett District School Board candidate. The write-in candidate received 337 votes. Douglas Farley, who received 100 votes, won by only a two-vote margin to Patricia Carter, who received 98. The other votes, according to the Prince Edward County Registrar’s Office, were either left blank or had other names included.

Running unopposed for Clerk of Court was existing Clerk D. Lynnette Coe, who received 6,131 votes, representing 98.13 percent of the vote. There were 117 write-in votes, adding up to the remaining 1.87 percent.

“We have already started accepting online payments effective Nov. 1 for folks to be able to pay their fines and costs online 24 hours a day,” Coe said about goals for the clerk’s office. “I’m looking into the procedure of starting e-filing, which means that civil suits can be filed online. They do not have to be brought directly into the office.”

Coe said the aim for her and the clerk’s office is to operate an efficient office that county residents can count on.

Local numbers saw a pull for Stewart in Cumberland and Buckingham, while Prince Edward revealed a majority showing for Tim Kaine.

Prince Edward and Cumberland counties received official voting results as of Wednesday afternoon, citing only minor changes from the unofficial results presented Tuesday evening. Due to provisional votes discovered during Election Day in Buckingham, Registrar Margaret Thomas said it may be Friday before official results are available, though said the changes that would be included are expected to be minor.

Bear sightings: what to know

A rash of bear sightings in the area recently has caused some alarm and conversation. Farmville Police Department Captain William... read more