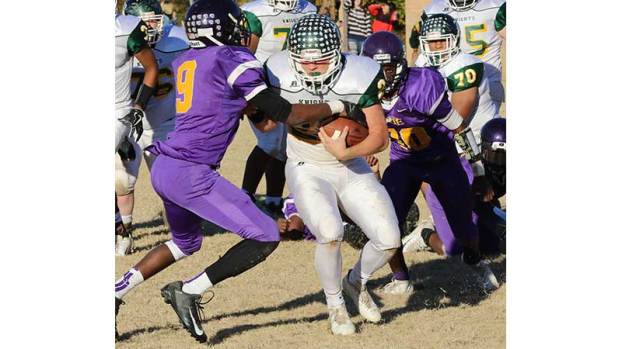 Buckingham County High School junior running back Walter Edwards charges forward with the ball Saturday afternoon while Prince Edward County High School senior defensive back Tajh White, No. 9, tries to pry the ball loose. The Knights prevailed 32-14 to clinch a playoff berth and a winning season for the first time since 2015. (Photo by Titus Mohler)

From 2009-15, there was something special in the air come November for Buckingham County High School’s varsity football team, a feeling that anything was possible because the Knights had made the playoffs. That feeling is back.

Buckingham defeated host Prince Edward County High School 32-14 on Saturday afternoon to secure a winning season and a playoff berth for the first time since 2015, fulfilling the goal set by Head Coach Seth Wilkerson from the moment he was hired in January. It was Wilkerson who served as the team’s defensive coordinator under late great Head Coach Craig Gill during that outstanding Knights run from 2009-15, and Wilkerson aimed to bring those glory days back.

“I’m excited,” he said shortly after Saturday’s victory, “excited for the guys that have been working since January, just believing in what we’re doing and getting in the weight room in the offseason and (we’re) just looking forward to it, excited. We just wanted to get in, and anything can happen once you get in, so that was the big goal for us. Just glad to be in.”

Prince Edward did not make it easy, however, limiting the Knights’ powerful running attack in the first half. Buckingham led by only five at halftime, 12-7.

Knights sophomore running back Xavier Copeland scored the first points of the game on a 5-yard run in the second quarter. Then junior running back Walter Edward scored on a 38-yard run.

“Prince Edward’s always got athletes,” Wilkerson said. “… Coach (James) Ford does a good job getting his athletes the ball. He uses the whole field. You’ve got to defend it all, and we had to make some adjustments at halftime for what they were doing, but our guys responded and were able to come out on top.”

Edward made the score 18-7 in the third quarter on a 13-yard run, and senior wide receiver Dashawn Bartee helped make it 25-7 on a 10-yard run in the fourth.

The Eagles came within 11 when senior wide receiver Rah’Quan Payne scored on a 66-yard run, but Edwards ran for a late 19-yard touchdown to seal the win.

Edwards finished with 19 carries for 206 yards and three touchdowns. Copeland had 17 carries for 116 yards and a score. Sophomore running back Xavian Gough also ran four times for 40 yards.

Edwards led the way on defense with 12 total tackles, including five solo tackles and one for a loss.

For Buckingham’s seniors, returning to the postseason is a special achievement.

“It feels good, man,” Stanton said. “We set a goal at the beginning of the season to come out 8-2, came out too short, 6-4. There’s more improving next year, but we’re back in it now, so just got to go out and perform.”

Prince Edward finished the year with a record of 3-7 after starting the year 3-2.