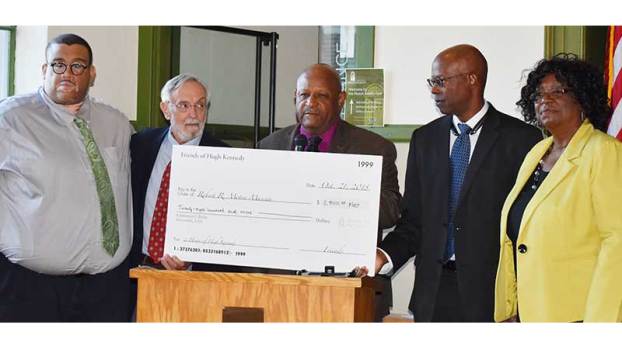 Representatives of the Robert Russa Moton Museum stand with a check for more than $2,800 honoring Hugh Kennedy for his service to the museum. Pictured are, from left, Museum Managing Director Cameron Patterson, George Bagby, Carl U. Eggleston, Board of Trustees Officer Drexel Harris and Robert Russa Moton Museum Council Chair Dorothy Holcomb. (Photo by Emily Hollingsworth)

Officials with the Robert Russa Moton Museum and friends honored Hugh Kennedy, who served on the museum board for more than 10 years at a critical point in the museum’s development.

Hugh served as treasurer with the Moton Museum board from 1999 to 2011. The ceremony took place at the museum Oct. 20. Hugh could not attend the ceremony due to being hospitalized from Chronic Obstructive Pulmonary Disease (COPD).

Whitfield Paige said he met Hugh in the mid-1990s at church. Hugh, he said, took on a lot of responsibilities and roles at the church, similar to how he had at the museum.

“As a friend, I am honored and thankful for the fact that the Moton Museum officers and members have honored him because he’s well worth it,” Paige said.

George Bagby read the letter from Martha Cook, who served as secretary for the Moton Museum board and worked with Hugh, who she said was conscientious with the finances of the museum, patient, even-tempered and good-natured.

“Thank you, Hugh, for your service and your friendship,” Cook said in the letter.

In a letter from the Rev. J. Samuel Williams Jr., he referred to Hugh by his nickname, Bly.

“What a stately, calm and clear-minded person I’ve known you to be since our earliest matriculating days at dear old Moton,” Williams said in the letter. “Your having displayed these qualities and others were just what the Robert Russa Moton Museum needed when you served in the capacity of treasurer.”

Bagby said he began serving on the museum board soon after the Martha E. Forrester’s Council of Women raised more than $300,000 to jump-start the museum and keep the location from closing.

He said Hugh was present when the museum celebrated the 50th year of the student walkout led by Barbara Rose Johns, and the 50th anniversary of the Brown v. Board of Education decision marking public school segregation unconstitutional.

“Through all of this, Hugh Kennedy’s work could not have been more faithful,” Bagby said.

Bagby said he found out years later that it was not uncommon for Hugh to fix equipment at the museum, to be called in the middle of the night to meet with police if the alarm went off, or to repair the oil tank in the snow.

Robert Russa Moton Museum Council Chair Dorothy Holcomb said Hugh was among members of the museum that recruited her to join the council back in the early 2000s.

“Mr. Kennedy was always really, very diligent in everything that he was doing,” Holcomb said. Holcomb said in addition to the hard work that Hugh and other council members put into the museum, Hugh was also one to delegate.

“He wasn’t afraid to put a broom in your hand,” Holcomb said. “I’ve always admired him, and it was a privilege to work with him.”

Past Moton President Carl U. Eggleston spoke about Kennedy’s impeccable record-keeping and his role in making the museum what it is today. Eggleston and several museum representatives presented Beatrice with a plaque and check of more than $2,800 to honor Kennedy.

“The last thing that he said to me when I left was to tell everybody he’s so sorry that he could not be available for this affair,” Beatrice said about Hugh.

Regarding the nights that Hugh would be called to come to the museum, Beatrice said she was up, too.

“I want to graciously thank everyone for their comments, because that is him” Beatrice said about Hugh’s character.

She asked participants to pray for his recovery.

The Farmville Halloween Parade and Trick-or-Treating event in downtown Farmville brought hundreds of youth and families to the area Wednesday,... read more