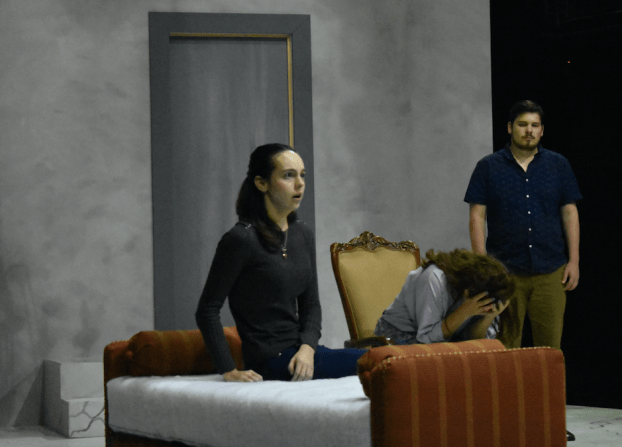 Mary Jo Corley, at left, who plays Inez in “No Exit,” has a distressing revelation with Erica Johnson, middle, who plays Estelle, and Ryan Bultrowicz, at right, who plays Cradeau.

Audience members can grapple with difficult questions and the experience of being at one’s most vulnerable without escape through Longwood University’s Theatre’s performance of “No Exit,” starting Wednesday.

“No Exit” will perform on Wednesday, Thursday, Friday and Saturday at 7 p.m., and Saturday and Sunday at 2 p.m. at the Mainstage Theater at Bedford Hall located at 201 High St.

The play was written by Jean-Paul Sartre in 1944.

“It’s three individuals who wind up in a room in hell where there is no exit, no way out,” Chris Brochon, Box Office Manager with Longwood Theatre Department, said. “They turn out basically being each others worst nightmares, is a good way to put it.”

Brochon said the play is one act and will have four characters.

“It’s approximately an hour and a half with no intermission,” Brochon said.

Brochon said proceeds from ticket sales go to support the theater department. He said students in the department spend a certain amount of hours in each aspect of putting on a show that includes working behind the scenes, ushering at the box office and acting onstage.

“They get to see all aspects of it from how to market it, how to sell tickets to everything that goes on behind the scenes and even on the stage,” Brochon said. “It’s really cool.”

Brochon said participants can order tickets online at longwoodtickets.universitytickets. com, or the box office is open Tuesdays through Friday, 2-6 p.m., and opens one hour before every performance. Brochon said seating is general admission and participants can park in the blue faculty or red commuter spaces near the building without being ticketed.

Members of the Cumberland County Board of Supervisors held a meeting Nov. 1 to discuss potentially amending the county’s code... read more