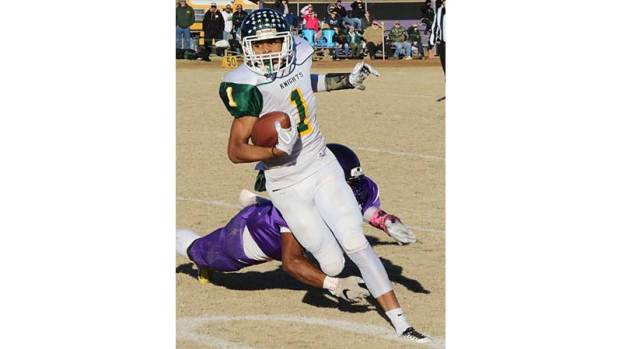 “Basically, we’ve got a big challenge, but it’s a great opportunity for this young group of guys to learn how to play in November and experience the playoffs,” Knights Head Coach Seth Wilkerson said. “Glenvar’s been ranked first for most of the year, and they have a lot of playoff experience.”

Wilkerson said he has told his players not to be satisfied with simply making the playoffs.

“‘Let’s make it count,’” he recalled saying to them.

The Highlanders are not one-dimensional on offense; they can be expected to run and pass the ball.

“From watching them on film, they do both pretty well,” Wilkerson said.

He cited them as featuring an all-district quarterback in the form of senior 6-foot-6-inch 235-pound Landry Gerbers.

“They’ve got a good running back who runs hard,” Wilkerson said, adding that they also have a good offensive line and two to three good receivers.

Summing up the Highlanders, the coach said, “They just play solid and are just a good team that doesn’t make a lot of mistakes.”

The Knights, who enter this game healthy, began preparing for Glenvar right after they got back from Saturday’s road win over Prince Edward County High School. But even with them having most of the normal prep time between games, Wilkerson said they cannot change up too much of their game plan.

“You’ve kind of got to do what you’ve been doing,” he said. “It’s worked fairly well for the most part, so we’re just going to do what we do and just try to do it a little bit better.”

From 2009-15, there was something special in the air come November for Buckingham County High School’s varsity football team, a... read more