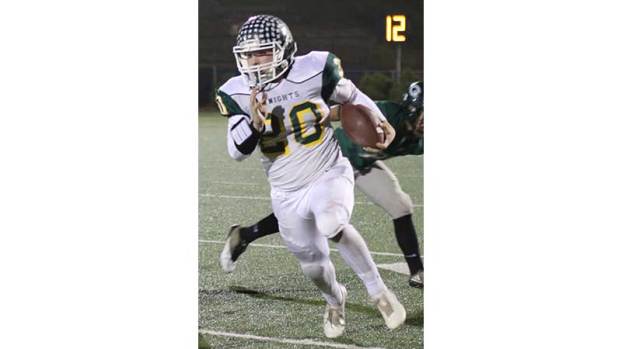 Buckingham County High School junior running back Walter Edwards runs against host Glenvar High School on Friday during the first round of the Region 2C playoffs. The Knights fell 41-0. (Photo by Lyla Wood)

Buckingham County High School’s varsity football team made impressive progress this year in its quest to return to its glory days, and Friday night’s Region 2C playoff game simply showed the Knights the next obstacle to overcome in that journey.

After returning to the playoffs for the first time since 2015, Buckingham, holding the region’s seventh seed, struggled against host No. 2 Glenvar High School, which had been the top team in the region for most of the year, and the Highlanders defeated the Knights 41-0 in the first round of the playoffs.

“That all-state defensive lineman, they put him at nose,” Wilkerson said, referring to senior Maxx Philpott. “They’ve got another defensive tackle, he’s about 350 (pounds) that moves pretty well.”

Wilkerson, in his first year as head coach, said he thought his players adapted well to the change in leadership.

The Knights finished the 2018 season with an overall winning record of 6-5, successfully achieving their goal of returning to the postseason.

“We’re losing four seniors, and we’re looking to build for next year and get these guys in the weight room and improve on that record,” Wilkerson said. “That’s the main thing I told them after the game.”

The Hampden-Sydney College football team fell 48-35 in the regular season finale and the 123rd meeting of “The Game” on... read more