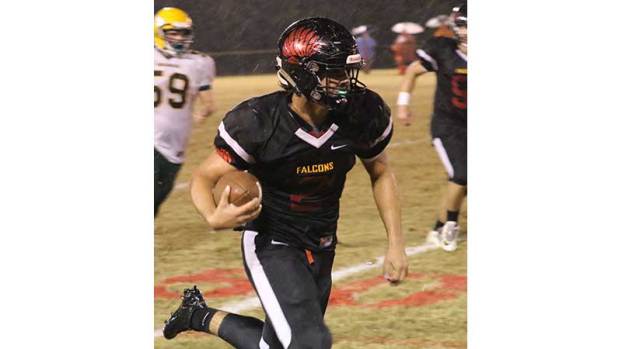 Fuqua School junior quarterback Elijah Warner competes Friday night against visiting Broadwater Academy. He helped lead the Falcons to a 49-8 victory that enabled them to clinch a berth in the state playoffs. (Photo by Titus Mohler)

The game marked the end of the regular season for the Falcons, who now possess the No. 3 seed and will visit No. 2 Blessed Sacrament Huguenot Catholic School (6-2) on Friday at a time to be determined in the VISAA Division III state semifinals.

Fuqua Head Coach Ben Manis was not sure of the details on his team’s exact placement in the playoff picture at the conclusion of Friday’s game, but he explained the process that led to the details listed above, which were announced late Saturday evening.

“Now it goes to committee,” Manis said Friday night. “It’ll be by points, it’ll be by coach’s poll and then it ends up going finally to the football committee. So, it’s a quality of a win thing and it’s also quality of opponents. They try to take all of that into account.”

On Friday at 7 p.m., the other state semifinal game will feature No. 1 Roanoke Catholic School (8-0) hosting No. 4 Portsmouth Christian School (3-5) at Vinyard Park.

As for Friday’s win against the Vikings, Fuqua had to lean on some of its basics, having played only four days prior at Isle of Wight Academy. “With that Monday game, it’s hard,” Manis said. “We didn’t have very much game-plan time. We had to prepare for a very good, tough opponent, so it is what it is. We ran some of our base stuff, which kind of works against most people, so that kind of is what’s great for us.”

Manis highlighted his team’s four seniors this year — Adams, Denaro, Isaac Drummond and Williams. Some of them served in unusual roles Friday in order to give them opportunities on offense.

“All the seniors got a chance to touch the ball,” Manis said.

The reality that they will end their Falcon careers on another playoff run was special for them.

“It means a lot to me,” senior Frankie Denaro said of making the playoffs. “I really didn’t think we were (going to), and I’m just so proud of my team right now.”

Fuqua started the year 1-4 but rallied to finish the regular season 4-5.

This is the third consecutive year that the Falcons have qualified for the playoffs.

From 2009-15, there was something special in the air come November for Buckingham County High School’s varsity football team, a... read more