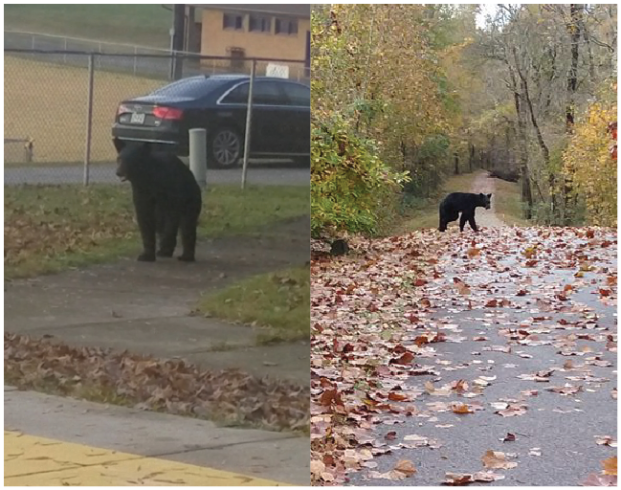 Pictured at left, is a bear walking through the Prince Edward County High School grounds recorded by Vanessa Pride Tuesday afternoon. Pictured at right, is a photo by Carolyn Gilbert Womack of a bear crossing the Dogwood Trail near Centra Southside Community Hospital Wednesday.

Bear sightings: what to know

A rash of bear sightings in the area recently has caused some alarm and conversation.

Farmville Police Department Captain William “Bill” Hogan said the police department received a report of a bear at the High Bridge Trail State Park Oct. 25 and had received a call about a bear spotted on Hurd Street Wednesday near the areas of Third and Fourth Avenues.

Hogan confirmed Thursday morning that someone in the Avenues discharged a firearm in an attempt to scare away the bear. Hogan said the bear was not injured.

Vanessa Pride recorded a video of a bear spotted at the Prince Edward County High School grounds Tuesday afternoon. Pride said it was the first time she had seen a bear at the school grounds.

A resident who lives on Third Avenue reported to The Herald Wednesday that two bird feeders had been knocked down at her property when she was away from home, and suspected a bear in the area may have been involved.

Anita Orange said she was cooking dinner at her Cumberland County home on Cooks Road recently when she heard noises outside the house.

When she went outdoors to investigate, she came face-to-face with a bear that was on her roof.

Orange said the bear ripped off the stove vent on the roof and ripped off roof tiles.

“When I came up that side deck, he couldn’t have been more than 10 feet from me,” Orange said. “I was just face-to-face with it, standing above me.”

She suspected the bear smelled bacon wafting from the vent and wanted to investigate it.

“He ripped the whole vent off the roof,” Orange said. She said she waited, panicking about her dog in the yard until she saw the bear come down from the roof.

She said her boyfriend replaced the vent and tiles the next day.

While bear sightings is not uncommon in more rural areas, bears in rural and urban areas can become a concern if there is destruction to property or if one bear is reported to be sticking around an area more than usual.

“We know we’ve got a pretty healthy population,” Martin said about bears in the region. “They’re in Prince Edward and the surrounding areas. This time of year it’s not uncommon for some of them, especially coming into the Town of Farmville, just looking for food as it’s getting closer to wintertime.”

Martin said the VDGIF received reports back in the summer of bear activity in Prince Edward.

“They’re very curious animals, but very docile,” Martin said. “They don’t want to get in a fight with anything at all.”

If people see bears by their properties, she encouraged them to keep easy food sources such as pet food, bird feed and garbage away, and to be loud. Bears can be resourceful, Martin said, and have been known to maneuver trash cans in order to get food.

“If they see a bear around their house that’s getting into pet food or garbage or grills, anything like that, they need to clean it up and secure it, and then harass the bear by making loud noises, clapping, anything like that,” Martin said. “The bear wants to really go back and get away from people and doesn’t want to be around us much, they’re just trying to find the easiest food they can.”

Martin said it’s not always necessary to call 911 when a bear is sighted, even in more populated areas if it’s an isolated incident.

“If people are seeing one frequently, over and over again, especially in more of an urban area where it seems like it’s getting used to getting easy food sources, then we like to know about that just so that we can try to go over and visit people and see if they need to clean up their bird feeders, or trash, what’s attracting the bear to that urban area,” Martin said. “For most folks just out and about, you might see one once and that might be the only encounter you ever have with it.”

Martin said to also contact the VDGIF if the bear appears to be acting strangely.

Martin said most bears do not enter a hibernation state due to Virginia’s mild climate. She said the bears that most would see in the Heart of Virginia are males or what are called yearlings, bears about 18 months of age who are on the search for food.

Hogan, like Martin, recommended that residents keep away open food sources that could attract bears, such as pet food, bird feed or garbage.

Buckingham County Sheriff’s Department Chief William “Bill” Kidd said bear sightings are common in Buckingham County, to the point where seeing a bear does not result in residents calls to report them.

“We’ve been steadily getting more and more over here for several years now,” Kidd said about the bears. “I think it’s gotten to be so commonplace that people are not alarmed about it anymore.”

Kidd said he spotted a bear crossing a road in the Town of Dillwyn last year. Kidd, who said he worked for VDGIF for 30 years, said bears are typically not aggressive.

“I would walk up on them in the woods and they’d run just as fast as they could,” Kidd said.

The Farmville Town Council is set to consider requests from FACES Food Pantry that include waiving cost of water and... read more