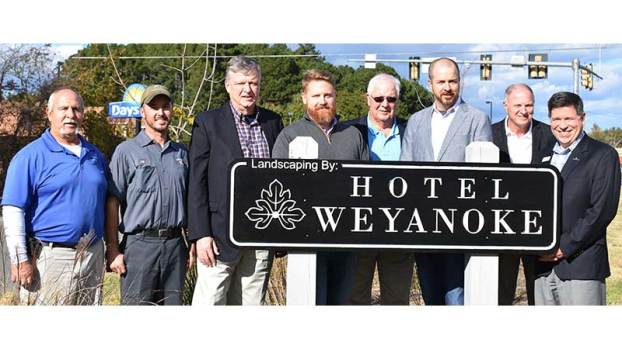 Hotel Weyanoke and the Town of Farmville partnered to beautify the area on the edge of South Main Street earlier in the summer.

Town officials said the opportunity to beautify a median and place a business at the front and center of it is available to other interested businesses in the town.

Town Manager Gerald Spates, Town Mayor David Whitus and At-large Council member Dan Dwyer said there were more than 30 places in town they said could be potential places for interested businesses to sponsor or install a median.

Town Horticulturist Jay Wilkerson said in addition to the plants already at the intersection, there will be 300 daffodil bulbs that will be planted at the median over the spring.

Hotel Weyanoke General Manager John Shideler said the decision to beautify the median was “to promote the Hotel Weyanoke, do something nice for the community.”

In addition to having a nice visual message, Shideler said it was also a way to give back to the area. The hotel officially opened in May.

Halloween events set to be treats

Families in our Tri-County coverage area should expect a pleasant variety of Halloween celebrations in whichever county they celebrate the... read more