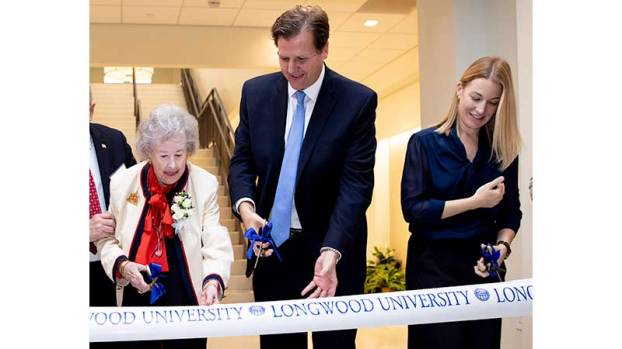 As generations of Longwood University alumni eagerly waited for a first look at the Upchurch University Center, a roar erupted in the entrance hall of the new building.

With the cutting of the ribbon minutes later, the Norman K. and Elsie Stossel Upchurch University Center officially opened, an 84,000 square-foot building in the heart of Longwood’s campus that houses many student affairs departments, the vibrant Student Government Association and several new dining options already popular with students and staff, according to the release.

As the alumni and special guests dispersed through the building to marvel at the student spaces and sparkling new amenities, there was one particular feature that drew audible “wows.” Many alumni were floored to see the impressive Wilson Chamber, the home of the SGA Senate. Some went inside to sit in the tiered rows and reminisce about their student experience at Longwood and what it would have been like if they’d had such a stately chamber available.

In celebratory fashion, students, faculty and staff attended a communitywide picnic before the ribbon cutting, lining up to have their caricatures drawn or photos taken for the opening.

“This new building is definitely going to bring the campus community together,” said Susan Sullivan, director of the university center and student activities in the release. “It’s in the heart of the heart of campus, and it’s a place where students can gather, meet, learn and grow. This is a place where everybody is valued and everyone is important. There is something for every type of student in Upchurch.”

Elsie Upchurch, with the Class of ’43, kickstarted the center’s development and construction in 2012 with a $4 million gift that was then the largest capital gift in the history of the university. The building is on the site of the former Cunningham residence halls, where Upchurch lived her junior and senior years at Longwood.

“When I think of the beating heart of Longwood I think of people like Elsie Upchurch,” Reveley said in his remarks Friday.

The largest non-residence hall on campus, the Upchurch University Center dramatically improves the offices, meeting space and technology used by student affairs departments formerly housed in the Lankford Student Union, which opened more than 50 years ago. The new building, which is more than double the size of Lankford, has a variety of spaces designed to meet the academic and social needs of Longwood students:

– The Wilson Chamber, a large meeting space with tiered seating where the SGA and other student organizations will meet

– Spacious offices for student-based organizations including Fraternity and Sorority Life,

– Gaming and lounge areas, including a circular room outfitted for video game tournaments or group play.

Speaking on behalf of the student body at the ribbon-cutting ceremony, Kellen Spradlin ’19 said it would be an understatement to say students are excited about the opening of Upchurch—and not just because of the new food options.

“As a member of a number of campus organizations that will have their homes here in this
building, I have learned so many skills that have helped me grow and develop into who I am today,” she said. “With the Upchurch University Center becoming the new focus of student life, we will now have all the resources, supplies and spaces we need to lead our student clubs and organizations to the next level.”

Christine Rindfleisch ’19 is editor-in-chief of The Rotunda, Longwood’s student newspaper, which is approaching its 100th year. Before moving to Upchurch, she said the newspaper rarely held staff meetings in its cramped basement office in Lankford.

“This new space will really increase our face-to-face interaction since we had gotten used to doing a lot of our work remotely,” Rindfleisch said in the release. “I think the university did a good job of taking into consideration what students need with the study spaces, with the food choices and with the space for collaboration. I am so excited to be in here—all the time.”

During her career, she was an active participant in many professional organizations, but her first love remained the classroom, particularly teaching seventh grade.

Perhaps the most visible student organization that will call the Upchurch University Center home is the SGA, which held its first meeting in the Wilson Chamber on Tuesday.

“Getting a space like this shows how important SGA is at Longwood,” said SGA President Josh Darst ’19 in the release.

“The university is putting a lot of trust in us by giving us space like this. They see how valuable we are as an organization.”

A tradition born more than a century ago, student government at Longwood has always had an outsized role compared with other colleges. The vibrancy of the organization can be seen as its more than 30 senators meet to take up complex issues important to the student body and advocate for their fellow students with administrators and faculty. SGA also oversees a substantial budget for student organizations, funding traditional campus events including Oktoberfest and Spring Weekend.

“Longwood students take great pride and ownership in their engagement,” said Cheryl Steele, dean of student engagement and an SGA adviser in the release. “There’s a very strong sense of student self-governance here. It’s a big part of the Longwood culture.”

The center informally opened on Wednesday, Oct. 17. At 11 a.m. that day, several hundred
students and other members of the Longwood community gathered around the main entrance, vying for the chance to be one of the first to have a look inside the spacious new building. As they scrambled through the doors, there was a lot to take in. “This is unreal,” said one student. “Better than I expected,” announced another.

Among the most immediately popular features of the new university center are the new food options: a full-service Starbucks on the second floor and three new restaurants on the first floor: Panda Express, a contemporary Chinese restaurant; FarmGrill, serving burgers and American cuisine; and Au Bon Pain, a café and bakery specializing in sandwiches, wraps and soups. “I’m very excited to see the different ways students use this space,” said Sullivan. “I’m sure it will evolve over time, and the great thing is it’s flexible enough that it can change with students’ interests.”

Election Day: What to know

Election Day is Tuesday, Nov. 6. Here’s what you need to know about polling places, and the state and local... read more