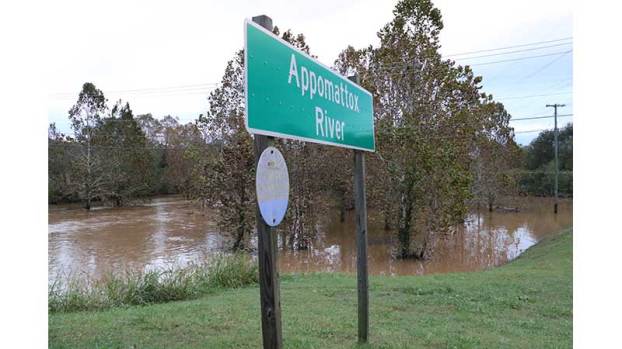 The status of the Appomattox River is depicted in this picture taken around sunrise Saturday morning. (Photo by Titus Mohler)

The Appomattox River and its overflow — Oct. 13

Based on a Saturday sunrise visual inspection of the Appomattox River as it intersects with North Main Street in downtown Farmville, it would appear the overflow was not quite as bad as expected.

Relaying some of the effects Tropical Storm Michael was having on the town, Farmville Mayor David Whitus noted Friday morning that the Appomattox River was expected to crest at 23 feet around midnight Friday night, but he also acknowledged the changing status of the river at the same time.

“Last night they were telling us it was going to crest early tomorrow morning between 8 and 9 and at basically 24 feet, which would have put water over the bridge,” Whitus said, adding that Friday morning, the National Weather Service was “saying it’s going to crest at 23 feet and probably around midnight tonight, and we’re hoping that will not put water over the bridge.”

At sunrise Saturday, there were only small puddles of water remaining in the parking lot next to a Green Front Furniture building, and while River Road had been submerged Friday morning, it was clear of water Saturday morning.

To see a gallery of photos of the Appomattox River and its overflow at sunrise Saturday, click here.

River to crest at midnight, power outages could linger

The Appomattox River is expected to crest at 23 feet around midnight this evening and power could be out for... read more