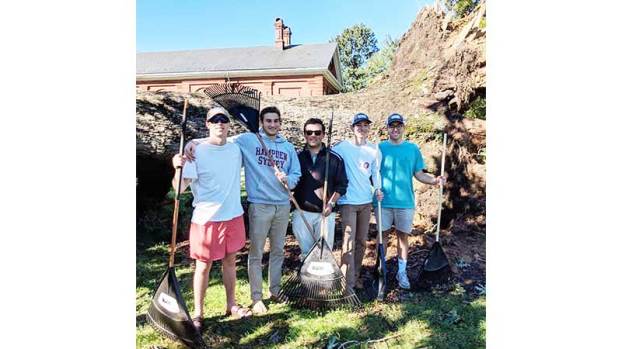 Stepping up to lead cleanup

Hampden-Sydney College (H-SC) issued a press release early last week sharing the impact that Tropical Storm Michael had on the campus but also highlighting how it brought out the best in the college’s community.

The release noted that when the storm suddenly intensified inland late Thursday, Oct. 11, it brought violent winds to Virginia. Staff responded quickly to ensure that everyone was safe during and after the storm, officials cited in the release. Then they added that in true Hampden-Sydney fashion, the community came together, and on Friday, Oct. 12, student leaders stepped up and began to help clean up campus.

President Dr. Larry Stimpert shared the following response with the Hampden-Sydney College community that was reproduced in the Oct. 16 release:

“Over the last few years, our Hampden-Sydney community has responded positively to opportunities — opportunities to develop new academic and co-curricular programs, recruit more students, secure more resources for the college, build and renovate facilities and think more boldly about our future,” Stimpert wrote. “This last week, our ability to respond to a challenge — a significant challenge — was also tested, and I am proud and grateful for how we faced that challenge.”

Stimpert pointed out that staff, faculty and students had less than two hours’ notice that Tropical Storm Michael was moving directly toward the campus and community.

“Though we lost many wonderful old trees and had power lines down on campus, we were blessed that no one was injured and few of our buildings sustained damage beyond minor flooding,” he wrote. “Before dawn on Friday morning, our Buildings and Grounds staff were already inspecting the damage, and they soon began removing trees from the roadways and cutting down trees that were leaning and posing a threat to people and buildings.”

“Students and staff members were raking and clearing sidewalks of sticks and debris throughout the next morning,” Stimpert wrote. “Special appreciation goes to the staff of our Pannill Commons and Tiger Inn who provided meals during and in the aftermath of the storm, including a lunch on Friday that had to be served while the campus was temporarily without water. I am always justifiably proud of our campus community, but especially so after seeing the way everyone responded to last week’s storm. I thank you all for the many ways you rose to the occasion and helped others, even while your own homes and families were without basic services.”

He acknowledged that recovery from Michael would take days and even weeks as the college has buildings to clean up and many trees to remove and replace.

“Having observed our campus community over the last few days, it is reassuring to know that the spirit that has animated this great college for 243 years remains alive and well,” he wrote in conclusion, early last week. “We will look forward to welcoming our full community of students and faculty back after our short fall break and extend a special welcome to all members of our community to attend this coming weekend’s Homecoming festivities.”

The Hampden-Sydney football team ended up creating a major highlight amid those festivities, winning 38-35 on a last-second field goal.

The Longwood Center for the Visual Arts(LCVA) will whisk families from Farmville to Mexico for one art-filled morning on Saturday,... read more