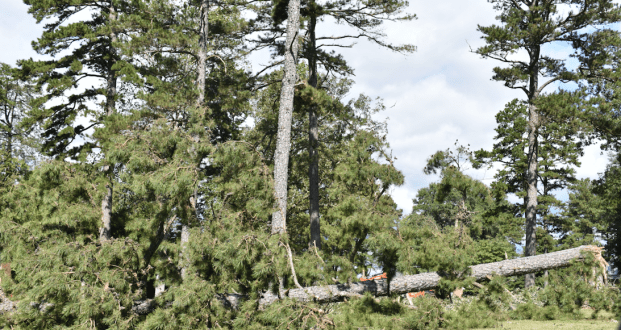 EMILY HOLLINGSWORTH | HERALD Downed trees, similar to the one shown here at Hampden-Sydney College, has created road closures and power outages from falling and damaging power lines. Crew are hard at work to restore power to those affected in Prince Edward, Buckingham and Cumberland.

As power restoration and road openings are continuing to gain traction across the Heart of Virginia, there are still a number of roads blocked due to flooding, washouts, and downed power lines and trees. Learn more about how this may affect Monday morning below:

The Virginia Department of Transportation (VDOT) encouraged motorists in a news release to give themselves extra time during their commute Monday in the case of potential detours or roadwork.

“Inspection crews continue to evaluate structures as floodwaters recede,” VDOT officials cited. “It is expected that within the next 24 to 48 hours, water will recede enough to allow this work to be completed and any repair plans developed.”

“In the meantime, staff is continuing to remove debris and trees, in conjunction with our utility company partners, and do restorative work, including shoulder repairs and fixing washed out roads,” Officials cited.

As of 4 p.m. Sunday, no roads are closed in Buckingham County due to the storm, the release from VDOT cited. All of Cumberland County and Prince Edward County’s primary routes are open, but 13 secondary roads in Cumberland and approximately 30 in Prince Edward remain closed. View the status of roads throughout the region here.

Southside Electric Cooperative (SEC) reported that as of 4:12 p.m. Sunday, approximately 9,200 of its members were without power, including 382 in Prince Edward, 410 in Cumberland and 19 in Buckingham. A news item from SEC cited that crew have discovered approximately 80 broken poles. To report outages, call or text if enrolled 1-866-878-5514. View the outage map here.

Dominion Energy cited that nearly 90 percent of its service members have restored power, but said as of 8 a.m. Sunday, there are approximately 65,000 without power. Approximately 1,015 are reporting without power in Meherrin and Green bay, according to the outage map from Dominion Energy. Scattered, smaller outages are reported around the region with a cluster of more than 300 past Cumberland State Forest. To report outages, call 1-866-366-4357 or view the outage map here.

Officials from both Dominion and SEC have cited that crew are hard at work to restore power.

Outage maps indicate that thousands in the Heart of Virginia remain without power. Representatives of Southside Electric Cooperative and Dominion... read more