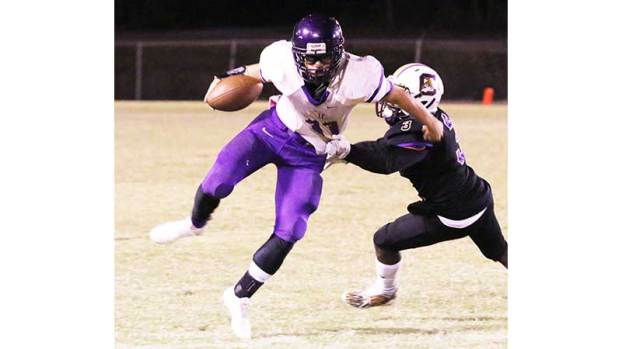 Prince Edward County High School’s varsity football team took a lead over host Central Lunenburg High School in the second half of Tuesday’s district showdown, but the Chargers were able to come back and claim a 36-22 win.

“I think our guys played hard,” Eagles Head Coach James Ford said. “We tried to match their physicality, and for the most part, we did a good job of it. (But) you can’t make mistakes when trying to close out games, and that’s what ended up happening.”

Holding a 22-21 lead near the end of the third quarter, Prince Edward ended a long Central drive by recovering a Chargers fumble. In a back-and-forth game, this looked to be a huge turning point, with the Eagles potentially building on their lead and sustaining their momentum they had established in the second half. But on the first play of its drive, Prince Edward fumbled on an exchange in the backfield, turning the ball right back over to Central while deep in Eagles territory.

Describing what happened, Ford said, “The mesh point between our back and our quarterback was off, and we just couldn’t compensate for it.”

Despite the loss, Ford distributed praise to a variety of Prince Edward players who distinguished themselves on the field.

“Our guys played well, I think for the most part, defensively,” he said. “We rotated a lot of bodies on the (defensive)-line and at (the) linebacker spot.”

On offense, “Nate played really, really well. Lunenburg did a good job of keeping guys in the box to stop our run game, and Nate was able to step up and find Tajh and Rah’Quan and R.J. (McCargo) for crucial passes in moments, and all four of those guys did a really good job in our passing game. And then when J’Sean was able to find some space, he ran the ball well.”

Payne finished with four receptions for 52 yards and two touchdowns along with four carries for 45 yards. White had five catches for 83 yards, Dupuy carried the ball six times for 28 yards and McCargo, a junior, recorded two catches for eight yards.

Recovering from a hip/groin injury, senior Rahme Marshall played for as long as he could on defense Tuesday.

“We limited him,” Ford said. “We knew, offensively, he wasn’t able to give us that explosive run that he’s used to giving us, but we knew he could help us defensively, and he did well when he was in, but the pain just was too much for him.”

Before going out in the second half, Marshall registered eight tackles for the game, including four solo and one for a loss.

The defeat drops Prince Edward to 3-5 on the season.

Concerning the playoff picture, Ford said, “We still, I think, control our own destiny, but we have to take care of business.”

The Eagles visit Goochland High School (8-0) on Saturday at 4 p.m. and then finish their regular season schedule Friday, Nov. 2, when they host Buckingham County High School (5-4) at 7 p.m.