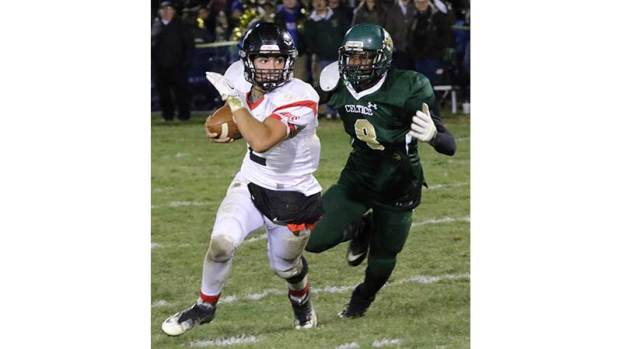 Fuqua School’s Elijah Warner, left, is pictured competing against host Roanoke Catholic School in the 2017 VISAA Division III state championship game, which the Celtics won 51-36. Returning from a hand injury, Warner was back at the quarterback position Friday night in Roanoke for the 2018 regular season rematch between the Falcons and the Celtics, but Warner and a younger, smaller Fuqua squad could not contend in the same way this year, leading to a 52-8 Roanoke Catholic victory. (Photo by Titus Mohler)

There was a much younger and less experienced version of Fuqua School’s varsity football team on the field Friday night in Roanoke compared to the one that traveled there last year to play in the 2017 Virginia Independent Schools Athletic Association (VISAA) Division III state championship game against host Roanoke Catholic School. This was a key factor Friday as the Celtics — which won the title game 51-36 — were able to pull far away from this Falcons this time and win 52-8.

“They’re by far the best overall team that I think I’ve ever seen or coached against just as far as personnel-wise goes,” Fuqua Head Coach Ben Manis said.

He also said they are the best VISAA Division III team this year by a significant margin.

“They’re better than when Blessed Sacrament (Huguenot Catholic School) was making their runs at multiple state championships,” he said.

The Celtics led 52-0 at halftime Friday, and Manis said that what accounted for the score was “just the difference in personnel. They’ve got 40 kids on the sidelines with many of them being there for a purpose of being there on the field, and you’re coming at them with 18 to 19 kids that probably 15 of them play as compared to 25 of them play — that’s a big difference. It is essentially like playing a school that is a division ahead of us.”

Due to a hand injury suffered during the preseason, Falcons junior quarterback Elijah Warner has been either sidelined or limited primarily to defensive duties, but Manis said he has been cleared by the doctor, and he returned his signature role on offense that he began to carve out for himself last year.

“He did well running the ball, but he just couldn’t take every lick of running the ball,” Manis said. “… He just can’t take every carry and then still be able to run the offense and play defense too. It kind of came down to who had more depth. We played well the first quarter or so till we just ran out of gas.”

The coach noted that Roanoke Catholic was prepared for Warner to throw the ball a lot.

“(The Celtics) defensive backs in the past have not been very good at all, and all of a sudden this year, that’s probably the best defensive backs and linebacking corps that they’ve had ever,” Manis said.

Warner still had some production, though, finishing with 49 yards rushing, including losses due to sacks, 63 yards passing and 32 yards receiving.

Fuqua junior Drew Osborn benefited from some late-game reps at quarterback. He finished with 58 yards passing, including a touchdown to his twin brother, junior Matt Osborn, who ended up with 68 receiving yards.

On defense, sophomore Ryan Ledger recovered a fumble and returned it 12 yards.

Considering areas of needed improvement, Manis said, “We missed a couple crucial catches that would have kept the sticks going, it would have kept everything moving, it would have kind of helped set some stuff up — one thing sets up another. So that’s something we probably will work on here in the future is just catching the ball, whether it’s in traffic or a little bit high or not quite on the money. We kind of got twisted up and around. One of our wing backs on a wheel play, we throw it to the outside, and he kind of twists to the inside.”