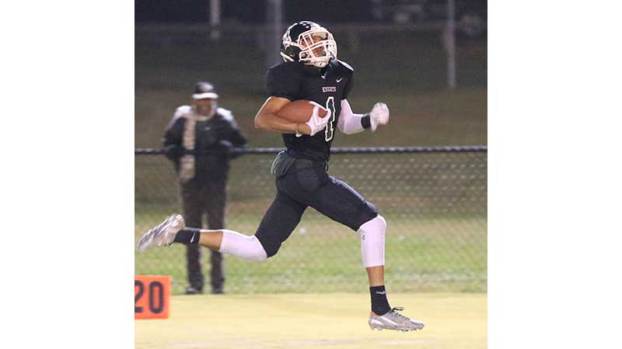 It’s highly unusual to ever play three football games in a six-day span, but when history looks back on Buckingham County High School’s varsity football team, it will remember that it not only did this in 2018, but it also went 3-0 in the process.

Thursday night after only one day of rest, the Knights finished off their compressed trilogy caused by Tropical Storm Michael and expected rainy weather Friday, defeating the visiting Randolph-Henry High School Statesmen 35-6.

“We just stuck to the basics, what we do, and didn’t have to change up too much,” Buckingham Head Coach Seth Wilkerson said. “We were able to put in a good game plan, I thought, on defense, in a day. They run two different offenses, so we had to get ready for two different ones, but they stayed in one, but I think the guys were prepared …”

The Knights were able to routinely spring big plays for long touchdown runs and also had a punt return for a touchdown. Wilkerson said the blocking that helped spring the big runs from scrimmage was simply part of his team’s regular offense.

“The offensive line is really understanding what we’re trying to do,” he said. “We’ve been putting this in for a few games now, and they’re starting to pick it up and really understand it and where they go and how they fit.”

“All of them deserve a lot of credit, and they usually don’t get it,” the coach said.

In the other two games the Knights played as part of their compressed trilogy, they defeated host Bluestone High School 28-7 on Friday, Oct. 19, and then topped visiting Cumberland County High School 39-8 on Tuesday, Oct. 23, in the Battle of Route 60.

Wilkerson reflected on how it felt to be at 5-4 with one game left in the regular season.

“Other than the first game, we’ve been in almost every game we’ve played,” he said. “I’m really proud of the guys for hanging in there. … We’ve got four seniors, and they’re getting ready to graduate, and we’ve got a lot coming back. So we’re just trying to build and trying to have a winning season and (make) the playoffs. We’re just trying to get in the playoffs and see what happens.”

On the field after Thursday’s win, he addressed his team’s position in the Region 2C playoff picture: “We have to win next week to be in …”

Buckingham will look to lock up that berth and close the regular season by clinching a winning season Friday when they visit Prince Edward County High School (3-6) at 7 p.m.

The gridiron Battle of Route 60 came on a Tuesday night due to Tropical Storm Michael’s impact on the schedule,... read more