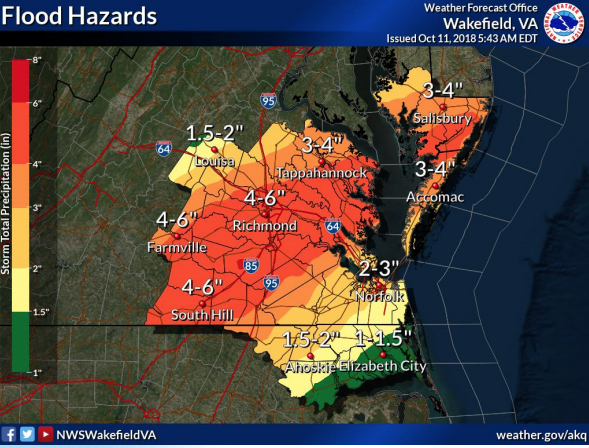 NATIONAL WEATHER SERVICE Pictured is a graphic depicting flood hazards in the region. The Farmville region is expected to get anywhere between 3-6 inches between Thursday and Friday.

The flash flood watch began 8 a.m. Thursday and is set to end Friday morning at 8 a.m.

“Heavy rain will spread into the region starting later this morning, continuing into tonight, and ending before daybreak Friday,” the advisory from the National Weather Service advising the flash flood watch cited. “Isolated thunderstorms will also be possible. Storm total rainfall of 3 to 6 inches is expected in the watch area.”

“This rainfall could produce flash flooding, particularly in areas of poor drainage and near creeks, streams, and ditches,” the advisory cited. “Street flooding is likely.”

A tornado watch for Buckingham, Prince Edward and Cumberland has been set until 9 p.m. Thursday.

Watches are issued when conditions are favorable for a specific hazardous weather event to occur, according to the NWS.

The NWS cited that a flash flood or tornado watch does not guarantee that those events will happen, but that they are possible.

A wind advisory is also in effect for the region beginning 6 p.m. Thursday until noon Friday.

The NWS advises residents to avoid approaching or driving through flooded areas.