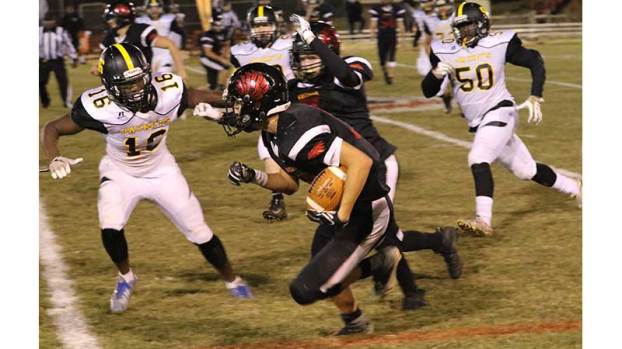 “After Monday’s game, having a short week and turnaround, I’m glad that we could kind of get a win like that, kind of cruise some in the second half,” Falcons Head Coach Ben Manis said.

The win improves Fuqua’s overall record to 3-4. After improving to 2-4 following the Oct. 15 game, the Falcons were ranked No. 5 in the fourth Virginia Independent Schools Athletic Association (VISAA) Division III state poll released this year. The top four teams in the division make the state tournament.

If Fuqua was lacking at all in focus Friday, it received a wake-up call early when the Yellow Jackets returned the opening kickoff for a touchdown.

“The kids kind of regrouped after that one, and I think that kind of helped get our minds back right,” Manis said. “After that, we kind of quit making any kind of big mistakes.”

The coach noted that on offense, his team took advantage of some of Randolph-Macon’s tendencies. One of the Yellow Jackets’ better players had demonstrated himself to be particularly aggressive on defense.

“We kind of took some of that into account,” Manis said. “Some more misdirection stuff worked very, very well.”

Fuqua junior quarterback Elijah Warner threw for 142 yards and a touchdown and ran for 81 yards and three touchdowns.

Senior dive back Christian Adams ran for 44 yards and a score and also caught a 14-yard touchdown pass. Adams was back after serving a one-game suspension stemming from a disputed call made early in the Falcons’ Oct. 5 road game against Roanoke Catholic School.

Manis said having Adams back makes a big difference.

“The blocking, scheme-wise, he’s kind of your old-school fullback or your new h-back kind of deal,” the coach said. “He takes some carries in the backfield, he takes some pressure off of the rest of the running backs because he can get (that) tough yardage.”

Sophomore running back Jackson Allen had a 60-yard rushing touchdown Friday, and he also passed to junior wide receiver Matt Osborn for a two-point conversion.

Warner also made an impact defensively, intercepting the Yellow Jackets and scoring a touchdown on the return.

The Falcons will close out the regular season with their next two games — first, a road game Friday against Isle of Wight Academy at 7 p.m. and second, a home game against Broadwater Academy on Friday, Nov. 2, also at 7 p.m.

“Those are two big games for us just as far as playoffs goes,” Manis said, adding that wins in both games could make Fuqua the No. 2 seed in VISAA Division III.