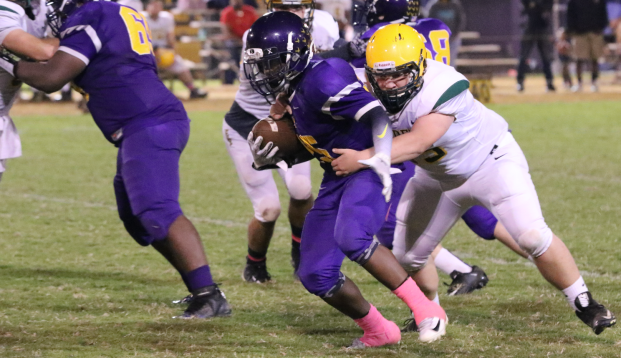 Prince Edward County High School’s varsity football team faced undefeated Amelia County High School on Friday night, and while the Eagles gained the momentum a couple times, they could not sustain it, as the visiting Raiders won 62-29.

While the Eagles were able to pile up a combined 271 yards on the ground against Amelia, their rate of scoring was not sufficient to keep up with the Raiders.

“We were able to move the ball a little bit, and our guys did well — offensively, we did well,” Ford said. “Defensively, we’d get ourselves on third down, and then they’ll hit a key play on third down and score, and then we’re behind the 8-ball. So, it stinks, but I take my hat off to (the Raiders). … They’re just a really good football team.”

Amelia set an aggressive tone to start the game when 6-foot-3 senior wide receiver Ziayahn Jackson returned the opening kickoff 93 yards for a touchdown. With a 2-point conversion, the Raiders were up 8-0 almost immediately.

But Prince Edward responded with a drive that ended with a 1-yard scoring run by senior wing back Jarrel Robinson.

The Raiders showcased their powerful passing game next, as Jackson scored on a 43-yard reception of a pass from senior quarterback Jalen Brown, followed by a 2-point conversion that made the score 16-7.

The Eagles showed their own passing game has some potency as freshman quarterback Nate Reed connected with senior wide receiver Tajh White for a 6-yard touchdown. A 2-point conversion made it a 1-point ballgame again.

Then Jackson scored for a third time in the quarter, this time on a 35-yard reception, contributing to Amelia’s 24-15 lead to end the first period.

The Raiders outscored Prince Edward 32-6 in the decisive second quarter. They grabbed a 40-15 advantage after touchdown passes of 55 and 92 yards from Brown to senior wide receiver Howard Divens.

Senior running back Rahme Marshall helped the Eagles respond as he scored on a 14-yard run. The 2-point conversion attempt failed.

Before halftime arrived, Amelia was able to score twice more, first on a 7-yard run by senior running back Justin Wilson and second on a 40-yard reception by Jackson from a Brown pass. The score was 56-21 at the break.

Prince Edward’s final touchdown came in the third quarter when Reed and White connected again for a score, this time on a 1-yard pass.

“Offensively, we did well,” Ford said. “We shot ourselves in the foot a couple times with some flags, but for the most part, our offense hung in tough and played well.”

Reed went 7-for-11 passing for 22 yards and two touchdowns while also running seven times for 28 yards.

“Defensively, we weren’t bad,” Ford said. “We just gave up key plays. We’d get a stop on first or second down, and then third down, they’ll make a play.”

Cumberland County High School’s varsity football team is lacking some of its star players due to injury, and they could... read more