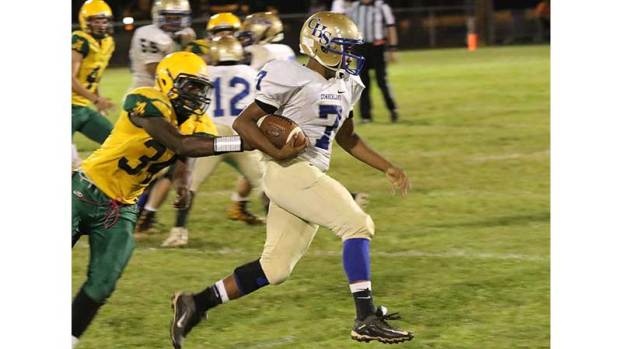 Another key injury made an already unenviable task even more difficult this past weekend for Cumberland County High School’s varsity football team, which played twice in three days and lost both games.

The Dukes played their scheduled game Friday at Nottoway High School, holding their own for a while, but then senior star athlete Ziahir Berry was sidelined due to a hand injury. The Cougars ended up pulling away for a 42-12 victory. Next, the Dukes had to turn around and play at Amelia County High School on Monday night in what was a make-up game, postponed due to Hurricane Florence.

Cumberland was overwhelmed by the undefeated Raiders and a surprising flurry of onside kicks that helped them establish a sizable lead fairly quickly en route to a 67-12 blowout win.

“We literally didn’t have the ball until the second quarter,” he said.

“We’ve just got a lot of things we need to fix special teams-wise,” Artis said. “Offensively, the couple possessions we did have, we looked good. (We) kind of fizzled out towards the end.”

Junior center Blake Barker went down in the second quarter with a probable concussion. Berry’s injury kept him out of Monday’s game.

Goochland 21, Buckingham 8 – Final The Knights cut the margin of defeat to the Bulldogs to 13 points after... read more