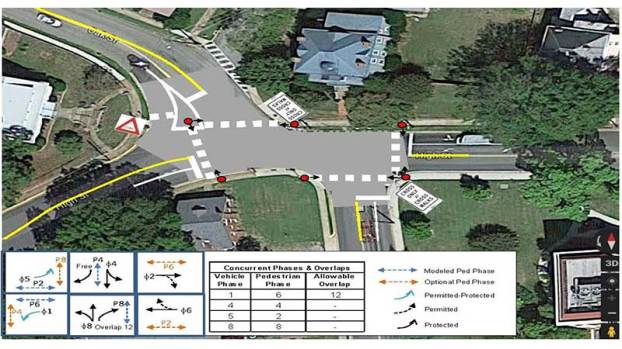 Pictured are modifications to the intersection of High Street, Oak Street and Griffin Boulevard recommended by the Virginia Department of Transportation. (Photo courtesy of Town of Farmville)

Council members decided to defer a recommendation provided by the Virginia Department of Transportation (VDOT) for temporary modifications of the intersection of High Street, Oak Street and Griffin Boulevard, citing that there would need to be more time for council members to consider other options, and that council members would need input from the public.

He said the total improvement costs associated with the project would be approximately $17,000.

“We feel it would move the traffic along until we come up with another measure down the road,” Spates said.

Spates said the roundabout could still potentially be a possibility, depending on whether the funds would be available.

Spates said due to the changing elevation of the sidewalk in the area of High, Oak and Appomattox streets, the disability access ramps at the sidewalk would be extended to move further down the street.

Ward E council member J.J. “Jamie” Davis asked if this crosswalk system would change the wait time of the lights.

Spates said the wait time for the lights would become more efficient.

Spates said this plan would allow money left over if the town were to consider a roundabout at this intersection.

“This is what VDOT recommended as far as being able to make it safer for pedestrians and move the traffic along,” Spates said.

Davis noted that the roundabout scored second in pedestrian safety.

Town Mayor David Whitus asked where in the budget the $17,000 for the improvements would come from.

Spates said the amount would come from contingency funding.

As council members considered a vote, Ward A council member Greg Cole was uncertain if the improvements addressed the potential for bottlenecks that take place on the straight lane of the Oak Street intersection, or concerns that the right-hand turn lane is not long enough to accommodate the vehicles at the intersection.

“I think we still have a problem here,” Cole said.

“I’d like to see us try to modify that somewhat,” Cole said.

At-large council member Tom Pairet said he does not believe the recommendation would solve all of the issues at the intersection, but said he believes it could be a help.

“I think it’s a step toward the right direction,” Pairet said.

Ward B council member Brian Vincent expressed concern about back up in traffic at the Griffin Boulevard portion of the intersection.

“In my opinion, there’s not a problem,” Davis said.

Whitus said after the vote he would like to give members of the public an opportunity to provide input on the intersection.

Between 25-30 residents are estimated to have been displaced due to the closure of the Town Motel at 1708 W.... read more