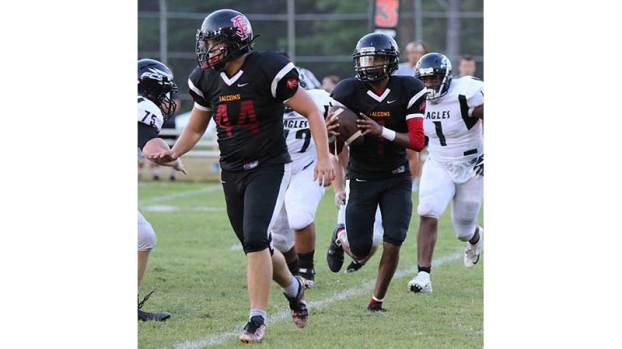 Fuqua School sophomore quarterback Maureon Tisdale-Couch carries the ball as senior dive back Christian Adams, No. 44, looks to block for him during a game earlier this season. Adams was limited Tuesday against host Atlantic Shores Christian School, and Tisdale-Couch suffered a season-ending injury in the 33-20 loss. (Photo by Titus Mohler)

Fuqua School’s varsity football team experienced success Tuesday night against host Atlantic Shores Christian School, but then the Falcons also got in their own way. The combination led to a 33-20 loss for the visitors.

Ben Manis, Fuqua’s head coach, noted the Falcons scored first and did some things that were great, but “also we shot ourselves in the foot,” highlighting six turnovers that came on interceptions, fumbles and lost snaps.

Manis cited that his players worked hard, but they had not practiced for six days due to tornado warnings and the shutdown of school as a result of Hurricane Florence.

It was inclement weather from the hurricane that pushed the Falcons’ game against the Seahawks to the unusual game day of Tuesday.

Manis said that Atlantic Shores was in the same boat, “but they handled it a little better, I guess.”

Fuqua lost more than just the game, unfortunately, as Tisdale-Couch went down with a season-ending shoulder injury. Manis said Tisdale-Couch is a good team player who was “big on offense, defense and special teams.”

“He’s really buying into what we’re doing, so it’s kind of frustrating to lose a kid like that,” the coach said.

Junior Drew Osborn will play some quarterback moving forward, along with Gee.