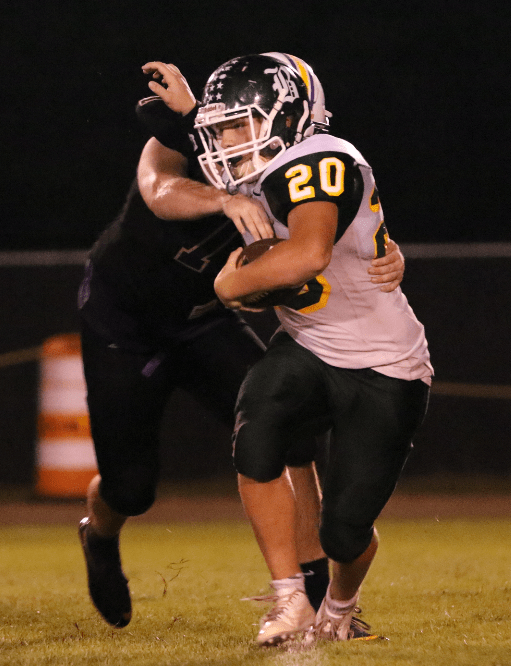 Buckingham County High School junior running back Walter Edwards was a big reason why the Knights were so competitive Wednesday. He gained significant yardage on the ground and scored their only touchdown to help force overtime, but host Central Lunenburg High School ultimately prevailed, 14-7. (Photo by Titus Mohler)

Buckingham County High School’s varsity football team was highly competitive against host Central Lunenburg High School on Wednesday night in a game that was scoreless for nearly all of regulation, but errors by the Knights helped a focused Chargers team to win 14-7 in overtime.

The Knights threw an interception while deep in their own territory late in the fourth quarter, setting up a Central drive that began around the Buckingham 30-yard line. The Chargers broke the scoreless tie with three minutes, 32 seconds remaining in the fourth quarter to go up 7-0, but then Buckingham responded as senior Deshawn Bartee set up his team’s ensuing drive with a big kickoff return. Junior running back Walter Edwards, who played quarterback for much of the game, capped the drive with an approximately 35-yard touchdown run to help tie the game 7-7 with 2:07 remaining.

In overtime, Central gained possession of the ball first. It started at the Buckingham 10-yard line with a set of downs to score, as per the overtime rules, which allow each team the same chance on offense. The Chargers moved the ball and then scored on a 5-yard touchdown run.

For the Knights’ possession, freshman running back Dalante Woodson advanced his team to the Central 4-yard line on the first play. But on the next play, Buckingham fumbled the ball, and the Chargers recovered to end the game.

Buckingham was without some players due to injury — including sophomore starting quarterback Gerry Toney — giving challenging, new tasks to different players.

The coach said that on the Knights’ last couple of drives in the game, they switched to a different formation.

“Our center for that (formation) was out, so we had to put somebody new in,”  Wilkerson said.

During the game, there were some big Buckingham plays that were brought back due to called penalties that were heavily disputed by fans, but Wilkerson was not preoccupied with these calls.

Despite the loss, Edwards had an outstanding game on both sides of the ball for the Knights. Offensively, he finished with 24 carries for 211 yards and a touchdown, and on defense, he led the team with 16 total tackles, including one tackle for a loss.

The game was moved up to Wednesday due to inclement weather expected to be brought to the region by Hurricane Florence over the weekend.

The Knights (1-3) return to action Friday for homecoming when they will host Nottoway High School at 7 p.m.

Wilkerson gave his appraisal of where his team is at in its development four games into the season.

Lewis to walk on for Spartans in ’19