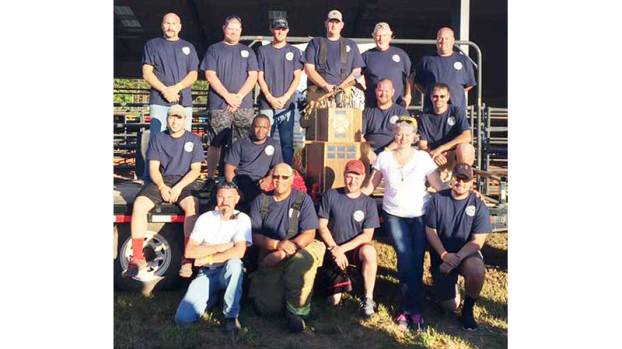 The second annual Thor’s Hammer firefighter competition and chili cook off, created by the family of Buckingham resident Thurston “Thor” Stish to honor his memory, is set to take place at the BARN venue Sept. 29.

Thor, 19 at the time of his death, died Dec. 31, 2015, in a vehicle accident a few miles from his home on Woodland Church Road in Yogaville. He was described by family and friends as outgoing, affable and compassionate, and someone who dedicated his life to his family and to firefighting.

The trophy was made by John Kronberg of Hollowing Creek Forge.

According to the news release, gates will open 11 a.m. and close at 6 p.m. Tickets are available at the gate and include chili tasting plus five redeemable food, drink and entertainment tickets.  Cash and credit cards will be accepted.

Participants can expect food, drinks, a bouncy house, cake walks, a silent auction and displays of various fire trucks in addition to the firefighter competition and chili cook-off.

Cassandra Stish said Aug. 27 that the event will focus on the four fire departments in Buckingham, but said she has received inquiries and interest from surrounding fire departments about competing and hopes to open the competition to more departments next year.

Stish said participants can expect more delicious chili, as there are a greater number of people signed up to cook chili this year.

Cassandra said participants can expect some changes to the layout of the event, including making the live band and audio easier to hear for the audience.

Speaking about she and her family’s reaction to last year’s event, Cassandra said, “we were overjoyed with the response from the community, and I was overwhelmed also with the amount of volunteerism, people who came forward to help out, to enthusiastically support and promote the event.”

“I’ve got a lot of the same people coming back,” Cassandra said about this year’s event. “We’re hoping that even more people will come now that they know what it is, maybe they’ve heard about it, that they’ll come and join us. The turnout I thought was excellent, the weather beautiful, so all we can hope is we get another repeat performance of the gorgeous day and everybody comes out and recognizes what we’re doing.”

“This is a labor of love, and while it very much centers around and is inspired by Thor and his passion for firefighting and his memory, it really is a community thing,” Cassandra said. “It’s a way that George and I can give back a little piece of what this community gave us, especially in the months and years following Thor’s passing. Buckingham is our home and this is something we can do that honors Thor and is beneficial to our home.”

Dillwyn Fire Department Chief Jason Wharam said in the release that the competition is “all about being together to have a good time. Thor’s Hammer is meant to uplift all of Buckingham and we hope all the fire departments get a chance to win it. We’ve got to spread it around.”

To learn more about the event, visit thors-hammer-festival.org.

This article was corrected from its original version.

The Vice President of the Buckingham County Volunteer Rescue Squad (BCVRS) has resigned from active duty with the squad, officials... read more