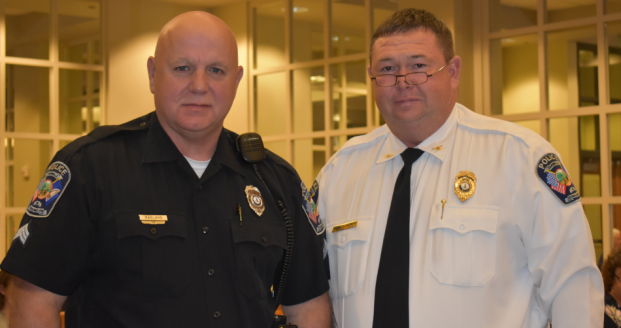 Farmville Police Sgt. David Ragland, left, received the 2018 Virginia Association of Chief of Police & Foundation (VACP) Award for Valor during an award ceremony Sept. 11 in Roanoke and was recognized by the Farmville Town Council on Sept. 12. Pictured at right is Farmville Police Chief A.Q. “Andy” Ellington. (Photo by Emily Hollingsworth)

A detective and sergeant from the Farmville Police Department was a recipient of the 2018 Virginia Association of Chief of Police & Foundation (VACP) Award for Valor.

David Ragland was one of 12 law enforcement officers from seven police agencies who received the award, attending a ceremony in Roanoke on Sept. 11.

Ellington, during the announcement of the award, described the situation that precipitated Ragland receiving the award.

Ragland and other police were dispatched to be on the lookout for an armed suspect entering Farmville on May 22, 2012, to inflict harm on his wife at her place of employment.

“The suspect had been involved in a domestic situation in previous weeks and was also under a protective order that prohibited him from transporting a firearm,” Ellington said during the meeting. “Officers from the Farmville Police Department and the Prince Edward County Sheriff’s Office located the suspect’s vehicle and attempted a traffic stop one block from the wife’s place of employment.”

The suspect fled and fired a shot at Ragland, an officer at the time. Ragland had initiated a vehicle pursuit.

Ragland continued to stop the offender, Ellington said, who ultimately stopped in a wooded area, stepped outside his vehicle armed with a handgun, and shots were fired by both the suspect and Officer Ragland.

“The suspect died at the scene,” Ellington said.

“It is unfortunate that the suspect made the decisions he made that day, but we are grateful that Officer Ragland was not injured as he continued to do his job at the risk of his own personal safety,” Ellington said. “It is apparent that multiple lives were in jeopardy that day: the spouse; her co-workers; and obviously the responding law enforcement units. However, due to actions taken by Officer Ragland, that threat was not realized and we congratulate him on his award.”

Ellington, after the meeting, said after an inquiry from The Herald that Ragland declined to comment on the award. Ellington said the case continues to have a difficult impact on those involved.

Dana Schrad is executive director of the VACP, which was founded in 1926 and seeks “to promote the professional development of all executive and management personnel within duly constituted law enforcement agencies in the Commonwealth of Virginia; to encourage close cooperation of all law enforcement agencies in the prevention of crime, detection of crime and the apprehension of those responsible for the commission of crimes; to promote the highest standards of the police profession through selection and training of law enforcement officers and generally pledge and strive for the highest degree of respect for law and order throughout the Commonwealth of Virginia,” the website cited.

Schrad said officers who receive the award and the cases that precipitated them are heavily scrutinized and investigated to make sure officers followed protocol and that the cases themselves are accurate.

She made it clear that the officers are not winners, often responding to dangerous and traumatizing situations.

“Domestic situations are some of the most dangerous that our law enforcement officers engage with,” Schrad said about the incident Ragland responded.

“Not only was Officer Ragland able to save his own life, but potentially the life of this man’s wife.”

She noted the importance of departments utilizing stress management training for officers who have responded to traumatic events, or for those who might face them in the future.

“Sgt. Ragland really deserves some recognition for what he did,” Schrad said. “Our officers are so severely scrutinized these days that when they do something right that saves the life of another person, then they should be honored for that.”

Virginia Family YMCA recently announced, in a press release, they will soon have a new neighbor. “The Y couldn’t be... read more