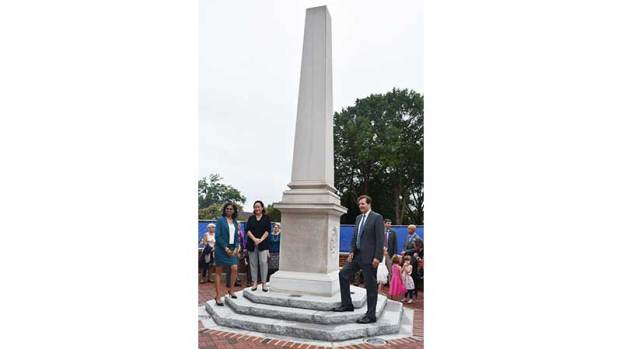 During a ceremony Friday across from the new Longwood University admissions building currently under construction, representatives of the university unveiled a monument meant to symbolize all aspects of Farmville’s history.

The obelisk-shaped monument, standing 16 feet tall, describes the area’s history under the header, “A New Birth of Freedom.”

“This monument honors all in our community throughout these centuries who have labored and sacrificed to bring forth, in Lincoln’s words, ‘a new birth of freedom,’” the inscription reads. “It marks also our commitment to honor their struggles by serving as a beacon of education, and of leadership forged in reconciliation, and marks our resolve to pass a still finer ideal of liberty to generations to come.”

On the side it has an American Eagle.

Marianne Radcliff, rector of the Longwood Board of Visitors, introduced the ceremony and spoke about the importance of the university, and the community to remember its history.

“History is complicated,” Radcliff said. “It can be painful, and shameful. It can be inspiring and uplifting. We gather today to unveil a new monument that honors the fact that this is a place that has truly mattered in American history.”

Radcliff said she hopes the monument will inspire community members as well as Longwood students.

“Perhaps most importantly, we make an enduring statement to those who will come after us, not just about the past, but about the present, about this place, this university and community today, in 2018, and the values we cherish and choose to honor,” Radcliff said.

She thanked representatives from Prince Edward County and the Town of Farmville who helped make the monument possible.

Vice President and Chief of Staff Justin Pope said the idea for the monument was announced by Longwood President W. Taylor Reveley IV during last year’s convocation, and since then various organizations and community partners have worked to make the statue possible.

Nadine Marsh-Carter, CEO of the Children’s Home Society of Virginia, Longwood Board of Visitors member and daughter of Hon. Henry Marsh, a lawyer integral in the reopening of Prince Edward County Public Schools after their closure due to retaliation to integration, led the invocation.

“We thank you for this opportunity to recognize all who, at a time when our community was so divided, made sacrifices and worked courageously, and came together to stand up for equality, fairness and inclusion,” Marsh-Carter said.

“As we leave this place, motivate us to continue the rich legacy of courage, and wisdom, and justice this monument celebrates,” Marsh-Carter said. “Empower us, Lord, to learn from the lessons of the past as we strive to move into our future as united people.”

“And finally Lord, bless us to be the citizen leaders you have created us to be and nothing less,” Marsh-Carter finished.

Revelely began his address by quoting Robert Kennedy, who addressed a crowd after Dr. Martin Luther King was assassinated.

“Even in our sleep, pain which cannot forget,

falls drop by drop upon the heart

until, in our own despair, against our will,

comes wisdom through the awful grace of God.”

“Sen. Kennedy and Dr. King walked these streets, our streets, right here, in momentous times,” Reveley said. “They knew the role of Farmville as a crossroads of history. Like President Lincoln once did from urgent reports, like General Grant and General Lee, like Patrick Henry did in almost prophetic ways as an old man, like Barbara Johns did in prophetic ways when so young, almost truly still a child, both striving for ideals of education across centuries here in Farmville, Prince Edward, America’s first home to two institutions of higher learning.”

“Can we love one another?” Reveley continued. “Can we, in this nation of many peoples, many heritages, many perspectives — in this world’s longest experiment in rule by ballot and law, with their vacillation and vicissitude, progress and backsliding, leavened and riven by free speech and impassioned disagreement? Against whatever next gale that sweeps from across this anxious, eager, fearful and fracturing country, against the sinful fear — I say to that question, for the South, for Virginia, for Farmville — this crossroads, which has had the eyes of the world upon it  I say ‘Yes, most certainly.’ Longwood says ‘Yes, we can.’”

Cameron Patterson, director of the Moton Museum, said the monument symbolized the effort of many to bring about education and equal rights.

“It’s a great thing to recognize individuals in our community who have fought for our freedom,” Patterson said, noting that for perspective Longwood students visiting the area, the monument will be among the first things they will see.

“It’s such an appropriate site to honor those individuals,” Patterson said, referencing that the site of the monument was the home of Dr. Gordon Moss, Dean of Longwood College, who was an outspoken proponent of integrating public schools in Prince Edward.

“I hope it’s a space people can come to and reflect and take real inspiration,” Reveley said after the ceremony.

A detective and sergeant from the Farmville Police Department was a recipient of the 2018 Virginia Association of Chief of... read more